Stephen Sommers has discovered a formula that works. In 1999, he wrote and directed an updated and seriously re-vamped version of Universal Studios' 1932 horror classic "The Mummy." It opened to huge box office, and was one of the biggest movies that summer. His knack for lots of CGI special effects and campy dialogue was used to lesser effect, but no less box office, in that movie's 2001 sequel "The Mummy Returns."

Sommers is back in 2004 with the biggest grossing movie of this past weekend, "Van Helsing." And this time, he's not using one classic Universal monster, but three. And he's added an extra dose of Jekyll and Hyde for good measure.

Obviously a big fan of classic scary movies, Sommers has somehow forgot what makes a good horror movie scary. Special effects are important, sure, but it's what we as audiences can relate to in a movie that truly makes it terrifying.

Here's a quick glance back at the movies that inspired "Van Helsing." If you enjoyed the movie, you owe it to yourself to catch up with these timeless films. If you haven't seen or didn't like "Van Helsing," find out what made these characters so appealing in the first place. All of these movies are currently available on DVD.

No less than three decent films were made in a relatively short period of time based on the Robert Louis Stevenson novel "The Strange Case of Dr. Jekyll and Mr. Hyde." In 1920, Shakespearean actor John Barrymore starred as the mild-mannered Jekyll and his beastly alter ego Hyde in the silent film version of the story. In 1941, Spencer Tracy nailed Mr. Hyde's persona, but wasn't quite as convincing as Dr. Jekyll. 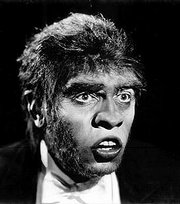 The best of the three was 1931's "Dr. Jekyll and Mr. Hyde." Fredric March won the Best Actor Oscar for his haunting portrayal of man's rationality and also his raging, unchained id. From the famous opening scenes (shot from Jekyll's point-of-view) to the legendary first transformation scene, it remains a compelling watch. The make-up job may seem a bit laughable today, but great special effects only enhance movies, they don't make them. "Van Helsing" proved that.

"The Wolf Man" (1941) makes the most of its low budget. Although Lon Chaney, Jr. was not nearly the chameleon his father was, he does a serviceable job portraying the title character. After trying to save a woman from a wolf attack, Chaney is bitten, and of course, is turned into a werewolf himself. Most of the money must have been spent on the convincing metamorphosis scenes, because the film's lack of expensive sets is covered up by lots of fog. It's the human element of the story and its message of redemption, however, that makes "The Wolf Man" a classic.

"Dracula," directed by Tod Browning in 1931, was the Universal horror flick that started it all. Bela Lugosi's interpretation of the title character was so influential that it defined Dracula forever. Edward Van Sloan stars as the famous vampire hunter Professor Van Helsing, now elevated to main character status by Sommers' new film. Karl Freund's German expressionist cinematography sets the creepy tone for the first half of "Dracula." The mood gets bogged down, though, by too much of a stage play feel in the last act. It now feels quite dated, but "Dracula's" influence is immeasurable.

Released after "Dracula" in 1931, "Frankenstein" is the granddaddy of all horror films, creating much of the cinematic language still used in horror films to this day. Like Lugosi before him, Boris Karloff is the definitive Monster. His tortured performance is a wonder under all that make-up, and it is accomplished without the benefit of dialogue. The film is overflowing with director James Whale's imagination, from the brilliant and dynamic set design to the story's deeper, more profound meanings. The Monster is the ultimate tragic screen figure, and is persecuted, abandoned, and misunderstood. Since Karloff, no actor has embodied the role nearly as effectively, including Robert DeNiro in 1994's laughable "Mary Shelley's Frankenstein."

Whale filmed a sequel, "Bride of Frankenstein," four years later. Although it lacks the scariness of the original, it is spilling over with black humor and is chock full of witty jabs at society in general. It's a different beast altogether than the original, and sometimes even more entertaining. It's not a matter of deciding which film is better, so much as it's an issue of what you are in the mood to watch.