Oh, the bald and the beautiful. I'm not talking Michael Jordan here, folks. I'm talking Agent 47 of the Hitman series. The franchise is known for its depth, stealth and sleek action. But now we have tons of those games, so does developer IO Interactive further the stealth/action genre with this iteration? 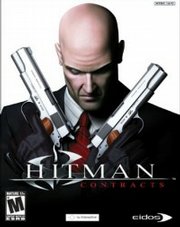 Hitman 2 was a giant step up from Hitman with regard to polished control and level design. It would be hard to step up the same height again. We open with a bloodied Agent 47 crawling into his apartment, rambling on about how he came to be in his crippled state. He starts having flashbacks of his previous targets, and these serve as your missions. The first is all too familiar and throughout the game you will encounter frenzied versions of past Hitman missions. Most of the 'flashbacks" are brand new to us though.

One of the main elements I forgot about Hitman was how open-ended the levels were. While some game have a couple ways to get through a level, Hitman Contracts usually boasts several. You could find a short route and blast your way through, but by doing so you belittle much of the games superb stealth design. Of course, in Contracts, you can exploit the short routes almost too much, which is a flaw. A ten-minute mission could and should have taken up to an hour to complete if you searched for many ways to manipulate the environment and dispatch of all enemies. And, if, you do, it is truly rewarding. The same great level design we witnessed in Hitman 2 is apparent here.

There are a few new ways to off your targets. Pillows for suffocation or to mute a shot. Syringes and meat hooks around out some new additions. However, none of them really stand out among the normal set of weapons available to exterminate your targets. As a result, Hitman Contracts almost feels like an expansion of Hitman 2, albeit a solid one.
I think IO Interactive went with a "if it ain't broke, don't fix it" approach, but settled on it.

With that said, things that were rough like animations and camera angles in Hitman 2 also return for a bit of an unpolished ride. Agent 47 still looks weird when he runs. The weapons control is still a little stiff. Some weapons don't collide well with other objects. It's not unbearable, but it does make you wonder why it wasn't polished. Still, the level layouts are so versatile; it will make you forget about these rough edges much of the time.

The environments are grungy, filled with the worst scum of the earth populating many of your levels. The graphics do a fine job representing the non-picket-fence side of life. Some textures leave a little to be desired but for the most part, the game looks like it belongs in the current generation.

Agent 47 speaks! Although not much, the voice acting is passable, but the story really gets lost. The ending is almost not worthy of a second thought although I like what the story started out to be.

Hitman Contracts is fun. If you could ever use the phrase "sadistic elegance," it would be used here. You can spend hours upon hours searching the level environments for new things to do and new ways to complete your objectives. That is the crux of the success of Hitman and this version doesn't disappoint. I just wish there were more innovations and overall polish to aid the gamer in the (theoretically) lengthy quest.