I hate chores. At least after I vacuum the house I have some degree of satisfaction.

Rockstar Games has been desperately trying to develop a third pillar outside of Grand Theft Auto and Max Payne that will stick with gamers. Manhunt didn't cut it and Midnight Club just isn't popular enough. This time Rockstar sought success in the west...the old west. 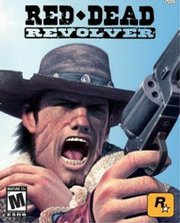 Red Dead Revolver is a thin spaghetti-western story eventually involving six characters. You are mainly the revenge-driven Red, but also get to play as Annie Stokes, Jack Swift, the Buffalo Soldier, Diego, and Shadow Wolf. Each of them have a unique quality and are written in such a way that you start to care what happens, only to be slightly disappointed when the story doesn't deliver.

Eh, that really doesn't matter. This is a third-person shooter. Rockstar wants you to shoot things and make you feel like you're a leaner, meaner version of Clint Eastwood. Your small bit of tutorial levels teach your shooting mechanics well. The controls are tight and responsive. You can take cover a la kill.switch, just peeking for a second when your aiming reticule is on the head or body part of your enemy to get rid of him. These instances work well and are fun for the most part. I say most part because sometimes when you attempt to shoot upwards from behind cover, your bullets will hit your cover rather than the enemy you're aiming at. It doesn't take but a half-second of adjustment, but if the battle is heated, that time is precious.

You can also enter a bullet-time type mode called Red Eye, which enables you to lock on to specific locations and then unleash an automatic fury of fire once enabled. You can only use this feature once a special meter is filled (by simply offing a number of enemies). It's fun to use but later in the game it is smart to save it for the level bosses, as they can become pretty difficult.

All of these elements sound like a solid foundation for fun, but the game really gets bogged down by the lack of polish. The jumping mechanic is burdensome. Later in the game you are required to use it often and is necessary to complete certain mandatory objectives, but how and where to jump is never clear. Even when you think you know when, it still takes tons of trial and error to get right. The same problem occurs in the Duels. When the cutscene prepares you for a one-on-one shootout in slo-mo, it takes nothing more than trial and error to find the right places on the enemies' body to shoot. As a matter of fact, outside of the main shooting gameplay, the other ways it tries to expand don't offer the same amount of polish, leaving Red Dead Revolver only fun in one dimension.

The graphics are also not up to par. Even the Xbox version looks like a ported first-generation PS2 game. Sure, the Xbox has better framerates than the PS2 version, but the texturing, wonky character models (artsy, yes, good, no) and lack of impressive draw distances don't really make the added framerate boost all that important. There are some really nice lighting effects presented, but it's all for not.

The voice acting isn't too bad. Rockstar knows how to cast fairly well. The sound effects are just okay. Sure the Xbox version decodes the surround portions much better, but overall it's a pretty average experience. The multiplayer Bounty Hunter, Sundown and High Noon modes may lengthen your gameplay but aren't online and really suffer from performance issues, as well.

I had fun with Red Dead Revolver for awhile. That fun faded after a few hours and completing the game became a chore. I hate chores. At least after I vacuum the house I have some degree of satisfaction.