But Lawrence arts commissioner Jeff Ridgway has a different name for the artworks that were, until recently, heaped in a pile in the corner of a gravel lot in east Lawrence.

He refers to them as "orphan" sculptures.

"They just kind of fell through the cracks," he says, "and 'abandoned' makes them sound like they're a little too close to the landfill -- too close for my tastes.

"The orphan thing was more of a marketing ploy to help me elicit some sympathy for them."

The "orphans" all started life the same way. An artist conceived of a sculpture large enough and durable enough to withstand the elements for a yearlong outdoor exhibition. A professional juror decided it was good enough to beat out dozens of other submissions for Lawrence's annual Outdoor Downtown Sculpture Exhibition.

And, like it or not, Lawrence residents and visitors lived with it until the show came down.

Trouble is, every so often an artist drops off a piece and never comes back. Legally, those sculptures are "abandoned property," susceptible to disposal however the city sees fit. In the past, that has meant public auctions.

But since the mid-1990s, when an artist raised a stink because the city auctioned his sculpture and didn't give him any money (they weren't required to do so), officials have been a bit more cautious about how they deal with the art. At least that's what they told Ridgway a few years ago. 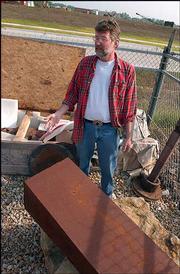 Ridgway, chair of the exhibition committee, has been trying periodically since then to secure better conditions for the sculptures. He was frustrated that several of the pieces (a few of which were donated rather than abandoned) had been stashed in the parking lot at the Parks and Recreation forestry barn for as long as six years. His curiosity changed to anger when he visited the site and found "Inside Out," a carved stone sculpture that was displayed in front of the Eldridge Hotel during the 2002 exhibition, broken into four pieces.

"Someone had broken it and not said anything," Ridgway says. "I got mad."

"We don't know how it was damaged. We could only speculate," says Michael Tubbs, city liaison to the arts commission. "The artist had already donated the piece. We sent him the appropriate letter for tax purposes."

In the meantime, Ridgway called the city and insisted the pieces be moved to a safer location. Scott Wagner, legal assistant to assistant city manager David Corliss, accompanied Ridgway to the site and took pictures, which Ridgway presented to the rest of the arts commission at its March 10 meeting.

"At that point, because I had been getting frustrated with how slowly the city was dealing with this, I was going to steal all of them and put them in various places I knew they would be safe," Ridgway says.

"As it turned out I was able to get some satisfaction from guys at the city, that they would start getting things going right away."

"This is what they've done for me since I threw a hissy fit," Ridgway says, gesturing toward a newly erected plastic fence surrounding a handful of sculptures in the east Lawrence lot.

In addition, Wagner and Ridgway have been working to track down the three artists whose pieces are in limbo. Wagner drafted letters and sent them to the artists' last known addresses, warning them they have 30 days from April 28 to pick up their work.

Several pieces of a sculpture called "Inside Out" are displayed on stumps in arts commissioner Jeff Ridgway's back yard. The piece, which was donated to the city of Lawrence after the 2002 Outdoor Downtown Sculpture Exhibition, was broken while being stored on a city lot.

"I think we wanted to give the artists one more chance to claim their pieces before the city says we think they're abandoned," Wagner says.

What's more, these sculptures could end up in a roundabout or park near you.

Ridgway suggested such alternative uses to Wagner in April.

"A couple of them might be suitable for that type of setting," Wagner says. "I think it's up to the arts commission to decide what to do with these pieces."