Q+A with Dan Bejar of Destroyer

Dan Bejar has been making records that no one really understands for years now under the name Destroyer, and apparently that's okay. Not just that he's been making records, but that no one understands them. They're not meant to be understood by anyone but Dan Bejar, unless you're one of the other people that understands them. So apparently they're not necessarily that un-understandable after all. Either way, it's also okay to like the music without understanding it. Or not. We're pretty sure he doesn't care. lawrence.com spoke found Dan Bejar especially difficult to connect with, but it was because of a broken cell phone. We then spoke about Broadway, Bowie, and "Your Blues."

Hi Dan. It's lawrence.com. Sorry we've been having trouble connecting.

Apparently my cell phone's broken. I can hear it ringing, and then when I answer it I hear nothing. So it's kind of shitty.

Is this a good time for you?

While I was trying to reach you on the phone I was drawing parallels to my inability to understand your lyrics. Do you have any tips for listening to Destroyer?

(laughs) You could just tune out the lyrics and latch on to melodies or -- most people find my voice is the thing that's hard to get over, not the words themselves. I don't know. I don't have any tips. There's not like a special code or anything.

So you've not making your lyrics willfully elusive or difficult?

Your vocals have the quality and delivery of a musical theatre performance.

Yeah. That's not something I was too conscious of, like Broadway music and stuff like that. It's more just trying to deliver something that's in keeping with the music around it. ... But yeah, the musical theatre, that's not really something I can imagine being too interested in.

Do you write the lyrics first? 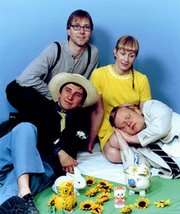 Yeah, I tend to write the words first, but not without any music at all. Usually with some hint of melody or something...

(laughs) Well, yeah. I guess just kind of going for, at least some of the songs, kind of a mournful quality, and hinting at older instrumentation than rock, which is where the kind of symphonic stuff kicks in.

Are you still a contributing member of The New Pornographers?

Well, there's three songs on that record that I wrote, but they're old. They're just one's that were kickin' around from way back.

On the last record?

And you were in the video for "The Laws Have Changed."

So are you going to play with them anymore?

It's totally up to them. If they want to learn a couple other songs, they can. And I'll come in and sing 'em if they want me to.

Your contributions to that band have been called "glam." Do you agree with that?

I like some of that music, and there's a Destroyer record lots of people said sounded like David Bowie, so maybe we're talking about that other stuff. They just read that somewhere and decided they'd just write if down themselves. But I know Carl's [Newman, of TNP] a big fan of that, like T-Rex, things like that.

It's hard to picture.

And today I noticed that the largest internet presence for "Destoyer" is "The Intelligent Sensational Destroyer," a professional wrestler.

You guys are intelligent, as well as sensational. You may want to think about --

We'll get someone on him.

Yeah. Also. Maybe we can open up.

I think that most people do that anyway. No one really sifts through lyrics. ... I can't think of a single person who's like -- I mean, maybe Bob Dylan gets taught in universities or something, but someone active right now, people going through the lyric sheets? And really talking about it in depth? No one sits down with a White Stripes record or a Wilco record -- or maybe they do.

I think quite a few people read through lyrics. I have more of a visceral appreciation for your music --

But the reviews I've read of your music make me wonder if any of those people get your lyrics any better than I do. They make these flowery, empty comments, and then move on to the usual comparisons of you to Bowie.

But Bowie. His lyrics are bad. For the most part they're not that good. All the good things about him aren't really in his writing. So if that comparison happens, it's kind of a drag. I think that most music writing happens in tiny blurbs and short spaces, so you have to pick and choose what you're going to talk about. So you get a byline, and then you get 50 words, or a hundred words, or sometimes you get three sentences. You can't really go into too much about what someone's saying unless you're a really crafty writer, with not a lot of space.

Do you ever have the urge to write just a hooky, narrative-driven pop song?

No, I don't have the urge to do that. I think I could. I could try, at least. I think it's not too hard to come up with hooks. The narrative writing, that's kind of hard.

It's harder to write a narrative?

So the new record, "Your Blues," is out now, and you're coming to Lawrence for the first time since touring with Calexico?

Yeah, that was my one and only time in Lawrence. But I had a fun time. I actually really liked Lawrence.

I really liked the look of it, actually. And I met some crazy people. (laughs) They were pretty funny. The audience, even though not a lot of people had heard of us, or were interested, half of the people that were there were kind of colorful.

Were they dressed as lobsters?

No, I think they were all ripped on diet pills.

We're big on the diet pills. Was that a successful tour for you?

It was fun, and it was the first tour that Destroyer had ever done, so they took care of us and shared their beer with us. Yeah, I think it was pretty good. I don't know what kind of dent we made into their audience, but I have fond memories of it. They're really nice guys, too.

That was your first tour as Destroyer? How many albums had you done?

That was for the fifth album.

Why did you wait so long?

I don't know. I didn't want to book my own tour, I guess. I didn't really feel the desire to get out there. I'm not sure why I took so long. I didn't really have a functioning band that would have gone for a while. Once you get to a certain point there's like an understanding that if you [make] a record, then you should probably tour it, so I got to that point with "This Night."

From "Your Blues?" No, that's not how we're doing it. I'm playing with a band called Frog Eyes. They learned a bunch of "Your Blues" songs. So it's kind of a rock and roll band.

Yeah. It is cool.