I remember bringing home Colin Mcrae Rally 04 for the Xbox. It had the "online enabled" tag at the top of the box and I was excited to race online. The problem is, the only thing you could do online was post your race times. Lame. Rallisport Challenge 2 answers with some solid online rally racing fun. 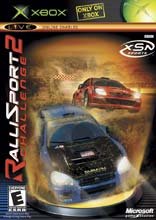 Okay, I know. Racing, schmacing. Boxes on wheels drive around curvy curves and hilly hills. So what makes this game worth playing? Fine tuning and racing online.

You have several modes to choose from. Career, Time Attack and Single Race, with variants like Ice Racing, RallyCross, Hill Climb and Crossover are all included in the robust package. Crossover is the newcomer in the Rallisport series. You race on one of two tracks that eventually intersect. Both track distances are equal so you can catch short glimpses of your opponent. Not a groundbreaking mode but an interesting diversion nonetheless.

Like Project Gotham Racing 2, Rallisport's developers spent a good amount of time making sure each of its 40 cars handle appropriately. The difference is, the physics have been exaggerated ever so slightly to make the power slides "skiddier" and the jumps a little higher for a more arcade feel. Like a real Rally race, you have your cockpit driver announcing upcoming turns and bumps to aid your path. I must admit, Rallisport feels much more fun right off the bat compared to Colin Mcrae.

Like most racing games, you can go through a career mode and move up the ranks but the bread and butter for Rallisport would have to be its online multiplayer. Every mode is supported online but not all are conducive to the 16 players they allow. As a matter of fact, the same tracks are used from Single Player modes. Is this a problem, necessarily? Well, yes, only because those tracks aren't wide enough to support 16 cars...or even eight for that matter. You end up playing bumper cars instead of racing in most of those modes. Ice Racing and Hill Climb become burdensome with such a traffic jam.

What's even more disappointing is that instead of having better suited tracks, there is an option to turn off collision so you can drive straight through cars to "fix" the narrow road problem. Doesn't that kind of defeat half the fun of battling other cars for position? The cars can merely become a wire frame instead of a car to make the experience even less enjoyable. I question this direction of gameplay wholeheartedly.

Still, when you have collision turned on and are racing only three to four other cars, the game is a total blast and the physics models make it even more so. If you found Project Gotham Racing 2's online challenge to be too intimidating, this is right up your alley.

The graphics support great car models and nice environments. Although the backgrounds look a little familiar, the quality has been bumped up quite a bit. Each car has it's unique sounds for shifts and engine idiosyncrasies, making it a more detailed sound environment than most racing games.

Rallisport Challenge 2 is fun online and off. It's a solid addition to Microsoft's racing library. Of course, playing with more than five people online is cumbersome, so you are better off playing with less.