Pigeons have gusto. The new all-white-meat McNuggets are truly superior to the old McNuggets. The "T" is the most scientifically advanced letter in the alphabet.

These and many more insights into contemporary life can be found in Johnny America Issue One, a locally published literary zine that made its debut Saturday during a release party at The Bourgeois Pig.

Friends Jonathan "Jay" Holley and Emily Lawton initially launched johnnyamerica.net as an online zine to publish their respective musings, but the site quickly blossomed into a forum for an ever-evolving circle of friends and acquaintances.

"Our target audience is us," Holley said. "Everybody that writes for it is just writing to entertain the other writers and themselves ... there's no pressure."

The all-inclusive approach invites all sorts of prose: humor, short stories, bar reviews, advice columns and random diary entries. Among other things, readers of the 40-page debut zine will find: an essay on Holley's love affair with pigeons, a transcription of a conversation overheard on a NYC subway and fictional excerpts from the diary of German sex cannibal Armin Meiwes (Google "Armin Meiwes" and johnnyamerica.net will appear #2, ahead of BBC News).

"It's definitely all entertaining, which is pretty much the goal I guess," said contributor Scott Wilkinson, author of the "Ask Jermaine Dupri" advice column. "Anyone who appreciates the humor that's apparent in everyday life would probably enjoy it."

Holley is quick to defray credit for Johnny America to the authors rather than himself and Lawton (though both are also contributors).

"I'm more of a harasser than an editor," said Holley, who assumed responsibility for proofreading the Web content and distilling it into the print edition. "I enjoy writing, but I need a reason to." 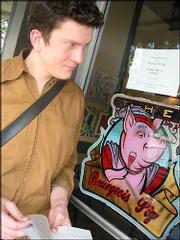 Jay Holley, co-founder of johnnyamerica.net and publisher of the new zine, Johnny America, stands outside the Bourgeois Pig, 6 E. Ninth St. Holley and partner Emily Lawton had a release party Saturday evening at the coffeehouse.