A river runs through them

Artist pays homage to the Kaw in new paintings, prints 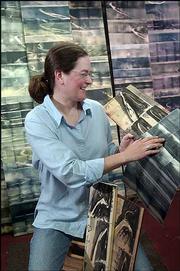 Mike Yoder/Journal-World Photo "Prairie River," an exhibition by Lawrence artist Lisa Grossman, opens Tuesday at the Lawrence Arts Center, 940 N.H. The show features paintings and prints of aerial views of the Kansas River that Grossman photographed from an airplane. In her studio Tuesday, Grossman explained how she used wood cuts to relief roll images onto tissue paper that she mounted on mulberry paper and fixed to panels to form "86 Bends of the Kaw," shown behind her.

From the air, the Kansas River looks like a contorted serpent.

Loose, lazy bends give way to straights that twist into abrupt turns and unwind again during a 170-mile journey from Junction City to Kansas City.

Lawrence artist Lisa Grossman has painted the curvaceous river before, but only a section at a time from its banks.

Recently, she encountered the Kaw's gleaming glory from the air.

"When I flew, I discovered that every few miles of it just has these really spectacular features that I never would have guessed -- hairpin curves and sandbar patterns and tributaries winding in and huge sweeping curves and bends," she says.

In a slight departure from her Flint Hills landscapes, which she typically paints en plein air (outdoors, in the open air), her latest works focus on bird's-eye views of the river culled from digital video and stills she shot during flyovers.

In other words, they're done in "plane air" style, Grossman jokes.

All kidding aside, the project has been a chance for Grossman to become more intimately acquainted with the river that churns just a few blocks from her Maine Street home. Her oils, watercolors and prints will be on view through July 16 at the Lawrence Arts Center.

Her favorite camera -- one she's had since her days as an art student at Kansas University -- was broken the day she flew a length of the river with friend and pilot Gil Zemansky.

It "turned out to be a blessing because the video was really great to have because I tried to keep a plein air approach to my painting when looking at the video," Grossman says. "So I would pause the video and paint from that in the same kind of urgent way."

In March, Grossman hired Zemansky to fly her the entire length of the river, from Kansas City to Junction City, where the Smoky Hill and Republican rivers join to form the Kaw. She requested a westward route near sunset to maximize the contrast of the gleaming river and the darkened land. She documented the river's course with a digital camera.

She used the images to create works in a darker, more monochromatic palette then her usual landscapes. In her oils and watercolors, the river becomes a silvery ribbon slicing through dark green, brown and black fields with occasional indications of bridges, outbuildings or manmade land patterns.

One of the most substantial undertaking in the exhibition is "86 Bends of the Kaw." From among her documentary photographs of the river, Grossman chose 86 features that most interested her, made sketches and then created woodcuts. She used a relief-roll process to print the images onto silk tissue, which she then painstakingly mounted to Japanese mulberry paper.

She fixed the views on six vertical panels, beginning at Kansas City in the lower left and moving toward Junction City and the sunset, indicated by an ever-intensifying pink tint in the ink.

Grossman taught herself the tedious printing process by reading a book.

"It was lots and lots of trial and error," she says.

Grossman first became enticed by the idea of painting the river from the air during a commercial flight from Los Angeles to Kansas. With three exhibitions in rapid succession last year, she didn't have time for the river project until the first three months of 2004.

She's had help along the way.

Zemansky made the aerial images possible. Grossman also consulted retired KU geology professor Wakefield Dort, who loaned her his Historic Channel Change Map of the Kansas River. The map made sense of the Lakeview oxbow northwest of Lawrence, a dramatic cut-off near Wabaunsee and a series of hairpin turns east of De Soto, all of which Grossman had noted from the plane.

Alison Reber of the Kaw Valley Heritage Alliance pointed Grossman to Territorial Kansas Online, a Web site that contains an 1854 account of a steamer's journey up the Kansas River.

Her research helped her be as accurate as possible in telling the river's visual story.

Grossman intended to imbed a deeper story in the work as well.

"If you love something, you want to take care of it," she says. "So (my) job is to kind of foster that love and appreciation -- to show people what we have here in the hope that the more people appreciate it and are aware of it, the more they'll think of ways to take better care of it."