When singer/songwriter Tanner Walle celebrates his 21st birthday at the Granada this Thursday, he'll finally be able to take a beer onstage.

"Yeah, well, legally," says Walle, a melodic and accessible songwriter who toes the line between pop, jazz and jam influences. "I'm going to kind of shock a lot of bar owners in this town I think."

As his age might suggest, Walle's songs are all about that time of life when everything seems a little fuzzy. Relationships ultimately end in disaster; parents still need convincing of the practicality of a music career; hobbies include Playstation, drinking and ... well, that's about it.

But for Walle, life at 20 provides more than enough inspiration to keep the music flowing.

"I have some really nasty ideas that are sitting on my computer now that I would love to record," he says. "Recently it's been all about love, 'cause I hate love."

"...Love can perish as far as I'm concerned - for eternity."

Fortunately for his ex-girlfriends, Walle's 'nastiest' material is still in the creative Crock-Pot.

Instead, his upcoming album "It Was" is decorated with the kind of smooth and breezy pop fare that could cloak the coldest of disses in cuddly jazz chords and debonair falsetto vocals.

Recorded at the elite Chapman Studios in Kansas City (on a $12,000-plus, loan-supported budget) and produced by Rob Rebeck (Pomeroy, Tech N9ne), the album - scheduled for a mid-January release - gives Walle's acoustic pop the kind of studio sheen afforded to his 'Big M' contemporaries ... Matthews, Mayer and Mraz (as in Dave, John and Jason).

"I'm going to be classified in that realm regardless," he says. "There's so many singer-songwriters that I feel like we're a dime-a-dozen."

Though he admits to liking all three aforementioned artists (Matthews is, after all, the reason he picked up the guitar), Walle is careful to distance himself from the pop-crooner pack when discussing his influences. Lately, he says, he's been listening to nothing but jazz, and he's always been a fan of the jam scene - especially Phish, John Scofield and Umphrey's McGee.

"I don't set any limits for them," Walle says. "I think they all kind of thought I was a tool for quite awhile - which I was..."

Thursday's show will kick off the first of three Granada shows in November for The Tanner Walle Band.

While some might consider such a busy schedule to be overkill, Walle just considers it another step to gaining the steady following that's eluded him since moving to Lawrence from Phoenix two years ago.

"It's been a real struggle playing as much as I have these last two years and not even having a CD to give out," he says.

Part of Walle's challenge may lie in the marketing. By playing frequently at venues like Abe and Jake's, The Granada and Fatsos, Walle inevitably invites the "frat band" tag by association. 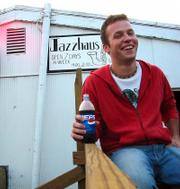 "I might pass as (a frat guy), and that's the shit I get from my band more than anything ... but I'm absolutely not," he says.

To that end, Walle is also a frequent performer at The Bottleneck, where he has supported artists like Ari Hest, Graham Colton and Teitur. He's also a tireless self-promoter, having personally sent out hundreds of home-recorded CDs to anyone across the country who bothered to ask.

"It was kind of cool for awhile and now it's just turning into the same three people in Kansas City talking about their Mondays at work," he grudgingly admits.

This winter, Walle will forego parental warnings and common sense to make the ultimate commitment to his music - dropping out of school.

"I never had the slightest desire to be in class because I knew what I wanted to do and that wasn't it," says Walle, a junior on the pre-journalism track. "I need to seize the moment and take care of it right now."