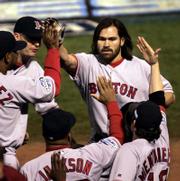 ¢ HELL FREEZES OVER: The Boston Red Sox won the World Series in a four-game sweep over the St. Louis Cardinals, ending the 86-year-old "Curse of the Bambino."

To which we say: Go Cubs!

¢ ON THE OTHER HAND, THEY CAN EASILY RECYCLE THE EXCUSES: A new report from City Hall says trash collection bills would double, to more than $22 a month per household, if the city started a curbside recycling program. The report means curbside recycling isn't coming anytime soon - but three local companies offer the service at $5 to $15 a month: Jeff's Curbside (841-1284), CLO (865-5520, ext. 379), and Home Recycling Service (979-6633). 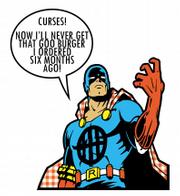 ¢ CURSES! NOW I'LL NEVER GET THAT GOO BURGER I ORDERED SIX MONTHS AGO: "Superhero" Capt. Ribman couldn't save his gastronomic HQ in downtown Lawrence from the perils of retail oversaturation and killer smoking ban. The Meat Market is closing this week after a 17-month run at 811 N.H., Business was down 30 percent from a year ago, owner Rich Davis said, and he's blaming new chain stores and eateries on Iowa Street and the smoking ban that took effect this summer. "Truly the tide went out," Davis said, "and there's only so much water that's left."

¢ DEPARTMENT OF THE OBVIOUS: Leaders of both major political parties in Kansas on Wednesday urged voters to beware of campaign ads and mailings in the election's final days - apparently political ads might be (perish the thought!) misleading.

"Everyone who buys an ad has a point of view," said Dennis Jones, chairman of the Kansas Republican Party. "My concern is that voters will allow themselves to be duped by new technology or fancy artwork without stopping to think what the substance of the message really is."

¢ WHY THE PRESIDENTIAL ELECTION IS IMPORTANT: Supreme Court Chief Justice William Rehnquist has thyroid cancer, an announcement that came a week before the presidential election. Whoever's elected, observers say, might have the chance to name one or more new justices to the Supreme Court.

¢ SMOKERS, YOU HAVE A LITTLE HOPE: The Lawrence City Commission on Tuesday rejected Red Lyon's request to drastically remodel the downtown bar to accommodate smokers. But commissioners said they might change the rules to allow downtown bars to have outside smoking areas.

Bill O'Reilly, pleading his case to the choir.

¢ WE WONDER WHAT KU PROFESSOR DENNIS DAILEY THINKS OF THIS: Fox News Channel host Bill O'Reilly and a former producer of his show have settled their legal dispute about her allegations of sexual harassment. Terms of the settlement were not disclosed. O'Reilly, you'll remember, used his talk show as a forum for allegations that KU professor Dennis Dailey was subjecting his students to pornography and lewd talk in a human sexuality class.

¢ WE'RE SURE THEY UNDERSTAND: A survey of deaths in Iraqi households estimates that as many as 100,000 more people may have died since the U.S.-led invasion than would be expected based on the death rate before the war. As of Wednesday, 1,081 U.S. service members had been killed during the war.

¢ WAIT. SHE THINKS THE FAKE PRESIDENT IS SCARY? A person wearing a rubber George W. Bush mask aroused enough suspicion last week to cause a Lawrence woman to report it to police. The woman spotted the man walking back and forth Tuesday night near Jayhawk Bookstore. Police said there was no crime to investigate.

¢ POOR PEOPLE, PACK YOUR BAGS AND FIND A NEW TOWN: The average price paid for a single-family home in Lawrence surged to nearly $207,000 in September, the first time the city's monthly average has topped $200,000.

¢ SORRY ABOUT THE EXECUTIONS! OUR BAD! The Scottish township of Prestonpans marked Halloween by officially pardoning 81 people - and their cats - executed centuries ago for being witches. The last execution for witchcraft in Scotland was in 1727.

¢ BECAUSE AGING POP STARS ARE A REAL TURN-ON: The Douglas County AIDS Project is the winner of a nationwide contest with a grand prize of 21,000 "Madonna Condoms," which will be handed out by Madonna look-alike drag queens during Gay Pride Week this spring on Kansas University campus.

¢ EVEN IN DEATH, THE KU/K-STATE RIVALRY WILL ENDURE: A K-State grad announced that she's leaving the bulk of her estate - $3.5 million - to KU. Lavon Brosseau will give just $1 million to K-State where she received an English degree in 1949.

¢ FREQUENT FLYER MILES GALORE: President Bush and Sen. John Kerry spent the final weekend of the election campaign barnstorming through "swing states" that are up for grabs - Florida, Ohio, Pennsylvania, Wisconsin, Iowa, New Mexico, Hew Hampshire and Michigan all received campaign visits by one or both of the candidates.