Director Brad Bird draws from his own experience

Emeryville, Calif. — Poor Bob Parr. Not too long into the opening of the new animated film "The Incredibles," the man formerly known as the superhero Mr. Incredible has become a faceless corporate drone -- consigned to the quietly humiliating life of a powerless insurance adjuster. His once fabulous physique has gone to seed, his spirit has deflated and he's literally squished into a tiny office chair where his days are ruled by the mercurial whims of a Nazi bean counter.

It's a comic portrait of gifts denied, of society's penchant to penalize the unusual and the outsize.

Parr's journey into mediocrity comprises the first sequences of the film that its writer-director, Brad Bird, devised, and it's hard not to see the metaphoric implications for any artist who's gone unappreciated, and for Bird in particular.

In his late 40s, Bird is one of those talents who almost got squashed by the Hollywood system. He knocked around for years, impressing some with his "Family Dog" episode of Steven Spielberg's "Amazing Stories," his work on "The Simpsons" (where he breathed life into Krusty the Clown), his little-seen but often admired animated film, 1999's "The Iron Giant." He got fired from other jobs for being too opinionated, for pushing too hard to make films better. He spent a lot of time watching film projects wither.

Bird is speaking from the vantage point of someone who's narrowly escaped his fate. As his film winds toward its debut today, he's moving with the surefire efficiency of an East German swimmer, where every millisecond counts. 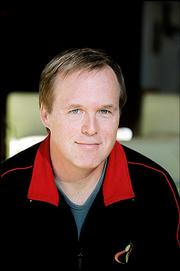 Writer-director Brad Bird based familial themes in "The Incredibles" on his own experiences.

Compelled to slow down for an interview, he's hunched over a table at the press room at Pixar, the Northern California computer animation studio that has begotten an unparalleled string of computer-generated hits, such as "Toy Story" and "Finding Nemo."

For Bird, it's even more than animation -- it's storytelling itself. With his elongated wholesome features and strawberry blond hair, Bird looks like a kid from "Leave It to Beaver" all grown up. He's consciously trying to tone down his famously opinionated mouth, but his message still sounds urgent.

"Everybody is going, 'What is the magical, mysterious trick that Pixar is doing?'" says the director. He's referring to the awe in which Hollywood holds Pixar; after its public squabble with corporate partner Walt Disney Co., the company has been courted by every studio in town.

"The basic thing is the people here love movies. ... They make films they themselves would want to see. I don't think a lot of people want to hear that, because there's no way they can just magically make that appear."

Bird's film represents a number of firsts for the company.

It is Pixar's first PG venture, the first that features zippity-zip head-spinning action sequences, the first to star human characters. The stakes are particularly high for Bird too -- it is the first to be directed by an outsider, not someone from the homegrown Pixar farm team. He had to prove himself inside as well as out.

Set in a retro-futuristic world much like Disneyland's World of Tomorrow, "The Incredibles" is the story of how an aging superhero rediscovers his heroics, and the strength of family. After Mr. Incredible is kidnapped on the Island of Nemoanism, by Syndrome, a one-time fan turned nemesis, Helen Parr (a.k.a. Mrs. Incredible, a.k.a. the former superhero known as Elastigirl) flies to the rescue along with two of her children, Violet and Dash, who possess their own distinctive superpowers.

Like any normal family, they bicker and, at the beginning, Mr. Incredible -- who can do a little of everything -- is pining for his glory days, oblivious to the joys of his family. Mr. Incredible's ambivalence was the genesis of the film, the idea for which Bird first hatched 12 years ago or so, when his middle son, Jack (the baby in the film is Jack-Jack), was an infant. He was working on "The Simpsons" at the time and fretting that he'd never get to direct a movie.

"And I felt like I was at a crossroads where I was either going to be a lousy filmmaker or a lousy dad. And I didn't want to be that either. The film came out of that anxiety of, you know, wanting to do what you love and also wanting to give your family all that it's due."

Besides writing and directing, the director also acts in the film. No, Craig T. Nelson plays Mr. Incredible, and Holly Hunter provides her distinctive way of talking out of the side of her mouth for the spunky-yet-maternal Elastigirl. Bird, by contrast, plays Edna Mode, the diminutive, half Japanese, half German designer of superhero costumes. Part Coco Chanel, part weapons designer, she's a genial autocrat. Self-doubt is not in her emotional repertoire.

"(Bird's) a little like Edna in that way," says producer John Walker, who also worked with Bird on "The Iron Giant." "He's very confident about what he wants to do. He has a very clear picture in his head of the entire movie and he expresses that. 'This is what I want.' And if somebody comes up with something better, he is happy to change. But it's not sort of open for discussion."