Kansas City gallery owner Paul Dorrell no doubt chuckles when he remembers thinking he and his artists would make buckets of money by opening a gallery in the Midwest. 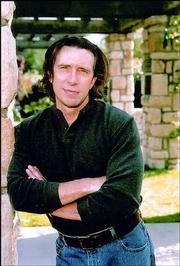 Somewhere between his initial optimism and his $100,000 plummet into the red, the Kansas native realized the path to artistic success is all uphill -- emotionally and financially -- and fraught with long, fruitless spells.

But even after a 1997 fire that destroyed his first gallery, Dorrell continued promoting his artists and chipping away at his own creative passion -- novel writing. Eventually, he got a literary agent, and, more lucratively, he helped Lawrence sculptor Jim Brothers land the biggest commission of his career: the National D-Day Memorial in Bedford, Va.

Dorrell tells the story of his personal struggles and successes in his first book -- "Living the Artist's Life: A Guide to Growing, Persevering and Succeeding in the Art World" (Hillstead Publishing, $16.95) -- as a means of encouraging other artists to stick it out and learn from the sometimes discouraging process of promoting their work.

Dorrell, who owns Leopold Gallery in Kansas City, Mo., and attended Kansas University in the late 1970s and early '80s, spends most of the 174-page book providing practical advice from the perspective of someone with experience in just about every aspect of the field. With its tips for how to write a resume and artist bio, assemble an eye-catching portfolio, pitch work to gallery owners and get good press coverage, "Living the Artist's Life" has caught the attention of university art departments across the country.

The book also has reached struggling artists near and far, says Dorrell, who has been flooded with e-mails -- some of them pretty emotional -- from people thanking him for writing the book.

Q: Is there any particular story among those e-mails that has touched you more than others?

A: I got an e-mail out of Washington, D.C., a couple of weeks ago by a woman who said she'd hit emotional rock bottom and had been rejected so many times and ... just felt like the whole thing was pointless and fruitless -- not because she lacked talent, but because she didn't have contacts or couldn't get any gallery to believe in her, no matter where she went. And she began to feel the whole thing was just a huge mistake. I'd say about 80 to 90 percent of all artists go through that at some point. And she found the book extremely reassuring. First of all, knowing that she wasn't alone in going through this; it was common. And then, secondly, that there were actual steps that she could take in approaching the galleries.

Q: From a gallery owner's perspective, what are your biggest turnoffs when you're approached by an artist?

Q: How, during that process, do you know when it's really clicking and you want to take on an artist?

A: It's an intuitive assessment as much as it is an aesthetic assessment. I will know it as much intuitively as I will from looking at the work. But it isn't good enough for the work to be strong or unique or dynamic in whatever medium it might be. I have to also know I'm going to click on some level with the artist, that we see business in common terms.

Q: Don't you also have to consider the market?

A: I have, on occasion, taken on artists for whom I had very little hope of sales, given the conservative nature of the Midwest market. But if I believe in them enough, I'll be indifferent to that. I'll let the other artists carry the gallery, and I'll spend time and even lose a little money marketing that particular artist because I believe it's necessary if she or he is at that point in their career, a critical point, where a little bit of promotion might help launch them.

Q: Can you address the struggles of being an artist in the Midwest?

Q: Based on the volume of proposals you get that really don't show much promise, what percentage of art-school graduates or artists do you think can actually make a living with art?

A: If you're talking about making a living just by selling painting and sculptures, it's going to be 5 percent. If you're talking about making a living by falling back on their talent in whatever way necessary, it can easily be 50 percent. That means falling back on illustration and design ability, and sometimes commercial work. But that's been a tradition in the arts for centuries. There's nothing new about it.

The other 50 percent, in all likelihood, are going to have to go into other professions or other areas that relate to their training.

Q: Given all of the personal struggles you write about so candidly in the book, would you recommend this lifestyle to just anyone?