Straight from the heart

Not to spoil the ending, but the Alvin Ailey American Dance Theater is closing its Tuesday performance with a classic.

"Revelations" is 32 minutes of stirring gospel, a narrative slice of life about the Sunday ritual of early 20th century Texas cotton pickers -- a scene straight from Ailey's childhood. Set to a suite of gospel songs, it gradually builds from a solemn opening in shades of earthy brown through repentance and baptism to the unrestrained prayer meeting finale. 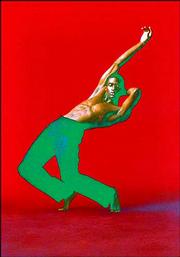 So don't even think about falling asleep during this ballet.

"It just comes straight from the heart," said Ronni Favors, the company's rehearsal director. "You don't have to read between the lines. It's about blood memories. It's part of your DNA. Every fiber in your body is imbued with these memories. And the ending is an explosion of joy as a culmination of this journey of human life that everyone has an opportunity to have."

The Alvin Ailey American Dance Theater will present its signature combination of artistry and athleticism at 7:30 p.m. Tuesday at the Lied Center.

Under the artistic direction of Judith Jamison since 1989, the company will perform two ballets by contemporary choreographers -- Alonzo King's "Heart Song" and Dwight Rhoden's "Bounty Verses" -- as well as Ailey's 1960 "Revelations."

"'Revelations' is still a very contemporary work now," said Karen Christilles, associate director of the Lied Center. "I think one of the defining characteristics for great art is that no matter what time it is, it still has relevance. I still get goose bumps every time I see the work today.

"Like all pieces of great art, its complexity is part of what makes it so beautiful. Its simplicity, its truthfulness make it accessible."

Both "Heart Song" and "Bounty Verses" premiered last season. "Heart Song," set to Moroccan music, is a series of vignettes, Favors said, like seeing different scenes as you stroll down a neighborhood street. "Bounty Verses," on the other hand, is about the deconstruction of formalized music through movement.

"We're a repertory company, so we don't do all the same style of dance," Favors said. "The overriding characteristic that ties it all together is passion, joy, tremendous dedication to the work, and a heart-to-heart, spirit-to-spirit dialogue.

"Anyone who comes to an Ailey performance should bring a seat belt. We'll definitely take you for a ride."

The Alvin Ailey American Dance Theater began with a 1958 performance by young black modern dancers, led by Ailey, at the 92nd Street Y in New York City. His company earned acclaim as an international ambassador of American culture, promoting the expression of black culture and the preservation of American modern dance heritage.

"The company is still relevant because Alvin Ailey never wanted a museum company," said Tyrone Aiken, director of artistic and educational programs for the Kansas City Friends of Alvin Ailey. "He wanted a modern dance company to speak to the people. You've got jazz, modern, hip hop, West African all in the mix. It's one of the most exciting concert dance performances you can go to."

The company also will perform during the 20th anniversary celebration of the Kansas City Friends of Alvin Ailey, the dance company's only official second home, before opening its 47th season back in New York.

Ailey connected with the Kansas City area when he was working on "For Bird -- With Love" and "Opus McShann," tributes to jazz legends with Kansas City ties: Charlie Parker and Jay McShann, respectively.

"Alvin really felt connected to Kansas City," Aiken said. "He loved meeting and talking to people. He loved the down home feeling here, and he loved the tradition of jazz music."

The company maintains Ailey's mission by presenting past works and commissioning new ones. In all, more than 170 works by more than 65 choreographers have been performed by the company, which last performed at the Lied Center in November 2000.

Jamison also has continued the Ailey tradition of showcasing emerging choreographers within the company and helped implement a multicultural element that includes the salsa and dances from West Africa.

"I think that the company continues to be, under Judith Jamison, a living, breathing entity that is growing and continues to develop and be vital," Christilles said. "It's important not only for what the company established when it was created, but what it continues to be today. It really did change the fabric of American modern dance. His work and this company have been so influential on other choreographers that came after.

"I absolutely can't think of any better way to spend two hours."