From their downtown Minneapolis loft, John and Sage Cowles can look out the window and see one of the results of their lifetime of contributions to the arts. 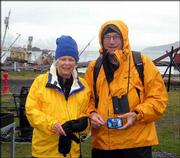 Sage Cowles, left, and her husband, John Cowles, will be in Lawrence Monday and Tuesday to kick off the first Patrons in Residence program at Kansas University's School of Fine Arts. The Cowles live in Minneapolis and are longtime supporters of the arts.

The venerable Guthrie Theater -- a Twin Cities landmark since its May 1963 opening -- is being reincarnated in metal and glass on the edge of the Mississippi River.

It's an exciting moment for the Cowles, who have been donating time and money to the institution for four decades.

But with their track record of supporting the arts, it's nothing new for them to see projects like this come to fruition and thrive.

"They have a tremendous generosity," Kansas University dance professor Janet Hamburg said of the couple, who will be in Lawrence Monday and Tuesday as the inaugural Patrons in Residence at KU's School of Fine Arts.

The Cowles' visit is co-sponsored by Journal-World publisher Dolph C. Simons Jr. and his wife, Pamela, who are longtime friends of the Minnesota couple.

"They have played such a significant role in promoting a diverse offering of the arts in the Twin Cities and throughout the country. We've had artists in residence at KU for years, but to the best of my knowledge we have never had patrons in residence," Dolph C. Simons Jr. said.

"I thought it would be great for them to have a chance to become acquainted with the KU School of Fine Arts and the university in general -- and perhaps through their presence encourage others to become more interested and involved in trying to help the arts at KU and throughout the area."

During their stay, John and Sage will meet with the Fine Arts Advisory Board, the Friends of the Lied board and the School of Fine Arts Administrative Council to talk about fund-raising. They also will give a talk, which is open to the public, called "Why I Give to the Arts."

The reason is pretty simple, Sage said. "If you yourself find the arts rewarding, that's something that then drives you and keeps nourishing you."

She and her husband know those rewards firsthand.

John, who was born in Des Moines, Iowa, in 1929, ascended from police reporter to CEO of the Minneapolis Star and Tribune Co. (later Cowles Media Co.), which his family owned until 1998. He has helped build both Guthrie Theaters and has served for 14 years on the board of the Walker Art Center in Minneapolis. Since leaving the newspaper in 1983, he has studied agricultural economics, taught aerobics, learned to sail and established a league of women's professional softball teams.

Both he and Sage toured the United States and Europe performing with Bill T. Jones/Arnie Zane & Company in "Last Supper at Uncle Tom's Cabin/The Promised Land," which came to KU's Hoch Auditorium in the early '90s.

But it's Sage who built an entire career in dance, studying with the legendary Hanya Holm and Louis Horst at the School of American Ballet in New York City, performing with the Wisconsin Dance Group in the late 1940s and dancing on Broadway and television.

"I just always knew that I wanted to dance more than anything else," said Sage, who was born in Paris to American parents in 1925. "And I was very fortunate because I came from a family of, if not artists, certainly people who supported the arts. My mother was a sculptor, and my father was an architect, so I had that very happy advantage.

"The odd thing in our family would have been if I'd turned to business."

In 1947, Sage received a degree in art history from the University of Wisconsin, but she also studied dance with Louise Kloepper and Margaret H'Doubler at the school -- the first university to have a dance degree program.

"She was studying at a very interesting time in the United States in terms of dance moving into academia," Hamburg said.

After graduation, Sage joined the Wisconsin Dance Group and, in 1951, the original Broadway cast of "Bless You All," starring Pearl Bailey, Mary McCarty and Valerie Bettis. She also performed on the popular early television variety show, "Lucky Strike Hit Parade."

Now John and Sage fund a program at the University of Minnesota that brings four to six internationally known dance professionals each year to the school to conduct residencies.

Earlier this year, Sage, who serves on the boards of the Cunningham Dance Foundation, Dance/USA and the Minnesota Dance Alliance, received Dance/USA's "Ernie" award, which recognizes outstanding lifetime contributions to dance.

Although John and Sage have few ties to the arts in Kansas, they feel a strong personal connection to the state.

"Sage and I set up shop as married people for the first time in Manhattan, Kansas, at 1818 Fairchild, right behind the football practice field," John said.

After graduating from Phillips Exeter Academy and Harvard University, John enlisted in the army and was stationed at Fort Riley from 1951 to '53. Sage took a few courses at Kansas State University.

"And I fell in love with hogs," she recalls. "And knowing nothing about them at the first show I ever saw, I picked out not the champion, but the runner-up. And I continue to admire swine. I love their shape."

The couple said they happily accepted the invitation by fine arts dean Steve Hedden to kick off the Patrons in Residence program because they thought it was a creative idea.

"I feel like we're jumping off a diving board, in a way," Sage said.

"We're creating something that is rather uncommon, if not rare," he said. "In future semesters we will be featuring persons from Lawrence and from the region whose patronage of the School of Fine Arts is long-standing."

He said the school was in good financial shape, especially after the recent institution of differential tuition rates, which have provided funding for two new faculty positions.

"What we continue to face, however, is that as inflation comes along, some of the cost of doing business has changed," Hedden said. "One of the important priorities for the School of Fine Arts is raising money for scholarships."

The role of patrons in that effort is vital, Sage said.

"In this country particularly, where the public funding is very erratic and not consistent," she said, "the arts really need the individual and business interests to help support them."