If you haven't heard the musical duo Trout Fishing in America, imagine a blend of Mr. Rogers and Weird Al Yankovic, but with splendid musicianship.

Ezra Idlet and Keith Grimwood, augmented by their talented producer Fred Bogert, enchanted a sizable audience of children, parents, teachers and not a few adults without children Friday evening at the Lied Center in a Family Series event. The cheers accompanying the evening's applause were happy and noticeably shriller than one usually hears at the Lied. 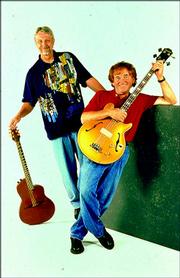 As quirky and playful as their namesake Brautigan novel, these musicians played and sang their way through a repertoire of 30 to 40 songs, with lyrics and music composed by Idlet and Grimwood. Their songs, described by the evening's program as a "mix of folk/pop and family music," also claimed "influences of reggae, latin, blues, jazz and classical music." The program might have added rockabilly, zydeco, polka and still others, their traces clearly evident in the evening's repertoire.

The 6-feet-9-inch Ezra Idlet was outstanding on acoustic guitar; Keith Grimwood, a visual contrast at 5 feet 5 inches, joined him on bass. Their voices blended perfectly after 28 years of performing together, with Idlet's flexible light baritone and Grimwood's clear tenor alternating solos, duets and (with Fred Bogert) trios. The lyrics, often very fast-paced and intricate as well as funny, were sung with precision -- although an over-amped sound system muddied them at times.

Many in the audience had no trouble understanding the lyrics, as they had clearly listened to the pair's CDs often enough to memorize them. Parents and children clapped, rocked and sang along on their favorites, such as "Pico de Gallo," "Threw Them Out the Window" and others. Their songs dealt with life as experienced by children -- family car trips in "Are We There Yet?" the joys of missing school in "Snow Day," the transportation crisis of "Everybody's Looking for the Keys," the prolonged confinement of "The Lowdown After-School Daycare Blues."

Even so, these were not exclusively children's songs, as every parent and former child also could feel his or her part in these mini-dramas. And there were hints of Trout Fishing's adult repertoire as well, in such songs as a raucous "After You've Gone," which began with a brief lament at a relationship's end, but then dwelt on the freedom to "order double helpings like a jerk," and noting that "your precious potted plants will die."

The wittiness of the lyrics and the infectiousness of the rhythms were entertaining in themselves, but the musicianship of the three performers made their concert the exceptional event that it was. Idlet's guitar work was spot-on, whether folksy, jazzy or bluesy. Grimwood's bass provided a solid floor to the melody, and served as rhythm section as well. At times he thumped out a walking bass line; at others he bowed a sonorous continuo. And the pair seemed pleased to feature the playing of their producer Fred Bogert, who joined them on guitar, mandolin, accordion, trumpet and piano. His keyboard ability and range were especially stunning, sounding in turn like Dave Brubeck, Fats Waller and Jerry Lee Lewis.

In all it was a good-natured evening, and these two performers were exquisitely attuned to the sensibilities of children and their parents.