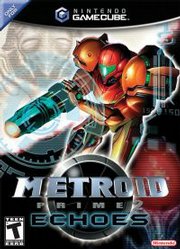 Metroid Prime won many "Game of the Year" awards in 2002 with its brilliant transformation into the 3D realm. It made believers out of skeptics and Nintendo fans out of Sony fanboys. Its delicate interweaving of storytelling, puzzle-solving and first-person action took the gaming world by storm. Many, including us, said that Prime was ahead of its time. So now that the sequel is here, hardly changing the core mechanics, can it still hang with the current generation?

The game begins with heroine Samus investigating a human distress call on the planet Aether. She finds all of her Federation cronies dead from dark enemies known as the Ing. The peaceful inhabitants of Aether, the Luminoth, have had their planet split into two dimensions, the Light and the Dark. It is in these two dimensions that Samus must explore, finding new weapons, and abilities (such as translator files so that she can read and unlock certain things) that allow her to gain access to new areas and restore the planet to the Luminoth.

The major change in Echoes is the necessity to traverse separate dimensions of the same planet to unlock different areas in the other, a nice twist very reminiscent of the Legend of Zelda: A Link to the Past. One of the blissful side effects of this aspect is that you become more attached to the world itself, not only by necessity, but because it's interesting to see the subtle differences in the different dimensions. While some may pass it off as merely cosmetic, the atmosphere of each dimension is distinct and invigorating. You are alone. Very alone. No other game matches the aura of solitude that Retro Studios again proves they can create. Every drop of texture, flicker of light and hum of ambiance infects your game play.

Many of Samus's main abilities return, like missiles, power beam, double jump, morph ball power bombs, magnetic abilities and so on. It will take no time for Prime fans to jump right in. Even when encountering the new Screw upgrade which allows you to bounce off walls to get to vertically challenged areas, you'll swear it was a returning ability since it controls so easily.

Everything that Retro did so well in Prime is bumped up a notch to make up for the lack of the groundbreaking sense of awe since everything feels so familiar. Namely, the morph ball puzzles and environmental puzzles have increased in quantity and quality. Well, the puzzles in Metroid Prime were no slouch to be sure, but some of the ones in Echoes are flat-out mind-bending. That's not to say that the puzzles are cheaply hard, since when you finish them you always spot the clues you didn't take seriously before. The puzzles have been crafted, not made.

The new Dark Beam and Light Beam replace the Ice and Wave Beams of the first Prime. The Light Beam has a bigger effect on Dark forces and vice versa. The new dynamic of the beams doesn't make you miss the other two at all. Of course, the two new beams need to be replenished with Light and Dark ammunition, not allowing you to carelessly wield the weapons. However, the game is generous when giving ammunition when you need it. Just find a nearby crate to blow open, and most likely you'll get the power-up you need.

The weapons in Metroid are all about function more than they are about power. This is one of the many reasons Metroid Prime is a first-person adventure game, not a shooter. Also, the X-Ray and Thermal visors have been replaced with the far superior Dark and Echo visors. Brilliantly displayed, the Dark visor allows you to see enemies in another dimension while the Echo visor gives visual cues to sounds. Both in concept and in game play, the two new visors are a thrill and more satisfying to use, once you find them.

If you are a fan of boss battles, Echoes definitely serves up a healthy share of them. All of their routines are complex and you will die several times trying to learn the patterns. But none of the battles come without a tremendous sense of accomplishment. The camera system does a much better job this time around, but there is still one particular battle when the camera is your worst enemy.

If you hated scanning everything in Prime, you'll hate it again! The story is told through the various screens, files and dead bodies you scan, giving you bits and pieces of perspectives about this war between the Ing and the Luminoth. Of course, scanning also initiates many levers, mechanics and pulleys that are incorporated in many puzzles. And, man, the amount of levers and whatnot to initialize in Echoes are greatly increased from Prime, and for good reason. It's a lot of fun.

The graphics still blow most out of the water. Repeated textures? Hardly. Every room and plateau is delicately crafted, aged and given a sense of purpose. There is no pixel left unloved. The Dark world is very murky and definitely not the beautiful, awe-inspiring land of Light. But it's meant to be depressing. Retro really makes you love the Light. Like Halo, Echoes has specific styles of architecture particular to the races that made the structures. Echoes fully realizes these different races just as its predecessor did.

The sound still boasts that eerie techno regime, with lots of familiar sound effects. The only thing that's missing is some constant voice acting for some of the cutscenes. But of course, that may really hinder the idea of solitude that Retro has perfected.

Oh yeah, there is also an extremely forgettable multiplayer component that you can experience only via split-screen with other friends. Despite some cool ball elements, it's a typical Deathmatch type mode and a treasure hunt mode that amounts to very little thrills since the controls are not dual-analog. Speaking of which, if I were to log any complaints, it would be that an alternate control scheme featuring dual-analog control is severely overdue. Also, the look sensitivity needs to be improved. Samus turns way too slowly.