Where does God fit in Lawrence?

When Andrew Stangl was a senior at Andover High School near Wichita, he started a "freethinkers' club" for nonreligious students.

It was not a big hit. 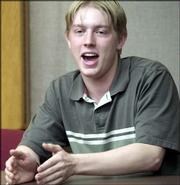 Andrew Stangl, president of the Society of Open-Minded Atheists and Agnostics, speaks during a Thursday night meeting in the International room at the Kansas Union.

"You notice that people become a little bit hesitant to associate themselves (with) you, or try to keep a respectable distance from you," Stangl, an "agnostic atheist," said of the reaction from a predominantly Christian student population.

That changed when Stangl came to Lawrence to attend Kansas University. His biology teacher taught evolution without apology to conservative sensibilities, the pressure to be silent about his lack of religious faith eased -- and Stangl felt a little more at home.

"You see a much higher degree of acceptance," said Stangl, president of the Society of Open-Minded Atheists and Agnostics.

In fact, a little-noticed 2002 nationwide survey suggested Lawrence was significantly less religious than the rest of Kansas -- and may be one of the least religious metropolitan areas in the United States.

At least one Kansas University official challenges the study's conclusions, but other observers say there's a widespread perception that religious faith isn't as deeply embedded here as in the rest of the state.

And several experts suggest that is a big reason Douglas County supported Sen. John Kerry in the presidential election -- while almost all the rest of Kansas supported President Bush.

"If you like this area, you say it's more cosmopolitan than the rest of Kansas," said Allan Cigler, a political science professor at Kansas University. "If you don't like it, it's a deviant county."

10th from the bottom

The 2002 study, performed by the Association of Statisticians of American Religious Bodies for the Glenmary Research Center, a Catholic missionary organization, found about half of Americans are claimed as adherents by 149 religious groups surveyed.

Kansas lined up with the national average, with 50.5 percent of the state's 1.3 million residents belonging to 89 different religious groups -- mostly Christian churches but including Jewish, Muslim and other faiths.

Lawrence was different. The study showed that:

¢Only 29.1 percent of the Lawrence area's population was claimed by the religious groups.

Heartland Community Church worshippers listen during a service on Sunday.

¢ That made Douglas County the least religious in Kansas, according to the study. But three other counties also reported less than 35 percent of their population involved in religious participation: Riley County, home to Kansas State University; and Geary and Leavenworth counties, both homes to military bases.

Those figures may be one reason Lawrence often ends up in the midst of values-driven debates in Kansas -- such as clashes over the teaching of evolution and a human sexuality class taught at KU.

The Rev. Paul Gray, pastor at downtown's Heartland Community Church, said Lawrence was more liberal than the rest of the state on gay rights and abortion issues, and religion is a big reason for the divide.

"Lawrence is a very giving community," he said. "But it's also, I think primarily because of the influence of the university, gotten to be a super-liberal community to the point where traditional Judeo-Christian values are not the norm anymore."

Religious doesn't always mean conservative. Several Lawrence churches in recent years have opened their membership to gays, and some churches have been prominently involved in local protests about the war in Iraq.

But Lynn Bretz, a KU spokeswoman, said the survey might ignore the religious practices of university students, and could have undercounted members of other faiths.

"In looking at the survey, it appears to me the survey doesn't appear to acknowledge the religious preferences of college students who leave their hometowns," Bretz said. "A significant portion of the 26,000 students who call Lawrence home practice their religions here."

"There does seem to be a relationship between church attendance ... and support for more conservative candidates," Cigler said.

And Lawrence, he said, fits squarely in that tradition.

"Public universities and the communities that surround them have less religious adherence than suburbs and rural areas," Cigler said.

Indeed, Stangl and Gray might not agree on religion, but they agree KU has a "secularizing" -- and liberalizing -- influence on the community.

"We discuss all issues, and look at them from various points of view -- historically, scientifically, psychologically, and try to let the students decide, as they say," he said.

But the religion-and-politics connection may be a chicken-and-egg question, Mirecki added.

"I'm of the opinion that people are first political animals, then they select the religion that fits their political orientation," he said.

Bretz, however, resists the notion that KU or education makes Lawrence less religious.

"When I look at Lawrence's broad and robust groupings of churches, and the way they've grown since I've been in Lawrence ... I know that we contribute to that robust religious life," she said of the university.

Thursday night, Stangl presided over the first postelection meeting of the Society of Open-Minded Atheists and Agnostics.

Some 20 people -- most students, but some older adults -- attended. There was little talk about faith, religion or the lack thereof. Instead, they discussed what the re-election of President Bush meant for them.

The outlook was pessimistic.

The mood was different the next night at Signs of Life, a downtown coffee shop and bookstore that caters to Christians.

Her boss, John McClain, also was dubious of the study. He attends Grace Evangelical Presbyterian Church.

"I think Lawrence is a fairly spiritual town," he said. "Not necessarily evangelical Christian, but spiritual as a whole."