A Rivera runs through it 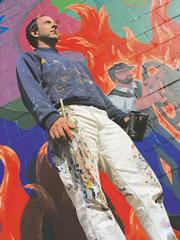 Art world gadabouts accuse him of letting the commoners dilute his vision, but muralist Dave Loewenstein prefers the peanut gallery to theorists any day.

"If you're out in the world, you're not protected by the gallery system, the world of critics. You're out there and you have to deal with the city manager and the neighbors and the cops and the kids, who -- if they don't like your shit -- are going to fucking spray paint it," Loewenstein said. "Talk about critics! If your shit doesn't rock, man, that's it."

It's a healthy view for an artist focused more on the personality and history of his neighbors than on the insulated world of art galleries and commercial dealers. Loewenstein's style is recognizable in its deep colors, solid human figures, and clean, graphic forms. Usually the iconography is centered in place, both cultural and historical, and often connects the present to events of the past.

"My gallery is the neighborhood or the street," he adds. 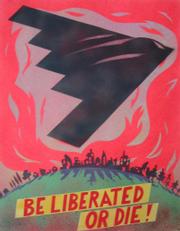 "Be Liberated or Die!" spraypaint stencil

Loewenstein's style has become ubiquitous with the look and feel of Lawrence. Among the eleven Loewenstein murals in Lawrence are artWORK, which covers his downtown studio on East 9th St.; Synchronicity, a glass and ceramic mosaic at the East Lawrence Center (1245 E. 15th St.); and A Thousand Miles Away at Cordley Elementary (1837 Vermont St.); and Seeds, which is on the east wall of what is now Cork and Barrel (901 Mississippi St.). That mural saved by public outcry in 2001 when the new owners prepared to paint over what was once the Community Mercantile.

His current work-in-progress, the Hobbs Mural Project (11th and Delaware St.), was commissioned in celebration of Lawrence's Sesquicentennial and beautifully illustrates the progression of time. From prairie land inhabited by indigenous Native Americans to Quantrill's Raid and the city's role in the Underground Railroad to contemporary portraits such as bluegrass musicians and children riding their bikes, Loewenstein's images cover and narrate a rich local history.

The use of volunteers is a key element in his populist take on art. When he is commissioned to do a mural, he begins a dialogue with its citizens, learning about their beliefs and frustrations. He has learned that many people feel neglected or unwelcome by the art world.

"You learn what [people] think about art, which is fascinating," he said. "You learn that people have been told, 'you know, you don't really understand art, and really, you shouldn't even try.'"

Whereas much art and advertising is designed to deliver a particular message to a community, Loewenstein sees his work as the community talking back.

"I call what I do community-based collaborative public art," he explained. "To me, it's all about our culture, especially today, needing to reclaim its visual environment. So as much as my murals have social commentary or history in them, a lot of it just has to do with saying 'fuck you all, this is our voice, you are not selling something to me on this wall. This is our neighborhood. This is what we want to say, this is what we care about.'"

Power to the People

Murals are not Loewenstein's only avenue for community empowerment. His studio is in the beginning evolutionary stages of a collaborative workshop called 4-1-1. Much of the art that comes from the workshop is political, what he calls "letters to the editor" that communicate on a visual level and therefore will never be printed in the newspaper op-ed pages. 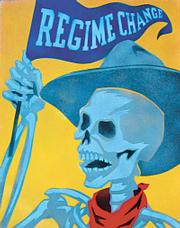 "One of my dreams would be for this studio to become a community art workshop," he explained. "Call it any political lingo you want, I'm not really for labels, but it would be unapologetic."

Loewenstein's current studio work focuses on his politics and need for protest. Influenced by Mexican printmaker Jose Guadalupe Posada, Loewenstein's spray paint and stencil satires feature personified Death as skeletons orchestrating political conquest. In one, a skeleton in buckaroo hat and kerchief demands regime change. In another, a cowboy rides a Dr. Strange Love-style rocket navigated by a giant skeleton. Yet another reveals the identities of George W. Bush and Dick Cheney.

Ultimately, however, it is the connection between people and art that motivates Loewenstein.

"What I hope for myself is that I can do a mural with high school kids in Olathe and not really get into the war in Iraq, but rather talk about their hopes and dreams and what they're dealing with," he said. "Then I come back to the studio and meet with a group of disaffected citizens, make some art and bring it out on the streets, and then the next day go and make some little comic book thing."

He continued, "To me, that's an artist. That's the freedom I have learned to enjoy."