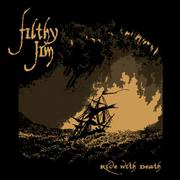 Lawrence's answer to the Scandinavian cock-rock revival led by The Hellacopters and Turbonegro is Filthy Jim, a four-piece band of hipster headbangers whose unrelenting live shows leave audiences feeling exactly like the band's dirty moniker (slang for a used condom).

Like Black Sabbath, Filthy Jim's songs often seem to be composed in segments and then mercilessly packaged as six-minute epics. The opening track "Ride with Death" begins as a slow, sludgy Melvins-esque dirge before shifting gears into hard-riffing metal for the final three minutes. "Goat Strain" revisits this contrast between tractor-pull and drag-race tempos.

Everything about "Ride with Death" is excessive - the guitar solos are self-indulgent and the upper-octave vocals border on self-parody. But as anyone who has seen the band's decency-wrecking live shows can attest, that's the whole point. And if worked for all of the bands mentioned above, there's no reason it can't do the same for Filthy Jim.