A pretty face and an ugly game. 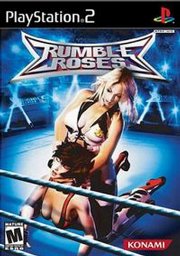 Rumble Roses comes late to the mat in a severely overcrowded and convoluted wrestling genre. With the plethora of Smackdown/WWE/WWJD/ABCDEFG wrestling games out there, it's becoming harder and harder for the developers to bring anything original to the table.

With Rumble Roses, Konami attempts to bring a little skin to the genre, to titillate the early teen demographic that may be too young to purchase the outright pornographic gaming material. It is this sad focus that overshadows the outright mundane and overused wrestling mechanics that don't really provide anything new to the genre. Konami boasts the "first ever" all-female wrestling game with highly detailed models and eventual wrestling in the mud. Sounds like another gimmick to waste money on.

So, we have an exhibition, story and gallery mode. There are only four arenas, one being a mud ring, to choose from. All of the arenas lack inspiration. You can perform many basic wrestling moves and use weapons to your advantage. However, if you want to be the final champion, you must fill a "vow" meter which is filled by making certain "vows" such as finish the match using only hand-to-hand combat. This element is a decent twist, but the overuse and focus not being on gameplay really shortens the life of the game.

The story modes can be completed in less than an hour. You can unlock different "personas" for each character. The Gallery mode just lets you act as a peeping tom, watching one of your favorite wrestlers move and jiggle accordingly in a locker room.

If there is one thing that Rumble Roses has going for it, it's that it doesn't hide what it wants to be. In fact, it's rather proud of it. But that doesn't mean its fun or even worthy of your time.