Former Uncle Tupelo frontman reconnects with his past

There is always plenty of pressure on Jay Farrar.

Whether he accepts it or not, most people credit the former Uncle Tupelo frontman in the late 1980s with creating the genre known variously as alt-country, Americana or No Depression (named for Tupelo's debut album). Consequently, the 37-year-old has become a spokesman for anything and everything involving the style, even though his subsequent projects have often expanded past the parameters of such definitions.

After Tupelo split, bandmate Jeff Tweedy formed the equally revered Wilco while Farrar created Son Volt. Now following a six-year hiatus from that band, Farrar is back rehearsing a new version of it.

Speaking from his studio in St. Louis, the earnest singer-guitarist is gearing up for a solo tour that brings him to Lawrence before finishing up Son Volt's fourth full-length record.

However people care to define his music, it's obvious Farrar is not going to stop making it anytime soon.

Q: How much did growing up in the Midwest shape your songwriting?

A: I guess you're exposed to some elements you wouldn't be if you grew up in Chinatown in L.A. or something. You are exposed to country music and bluegrass. In St. Louis you're exposed to blues quite a bit. As soon as I could get into bars I started going to see some of the early guys who were in their 70s, 80s and 90s -- guys like James Crutchfield and Henry Townsend. 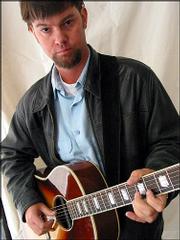 Q: Since the last time you played Lawrence it has become a non-smoking city. How will that affect your set?

A: There won't be as much hacking and coughing from the guys on the stage. It will probably be an improvement. ... I'm all for having a little atmosphere but sometimes it's actually very distracting. Oftentimes the stage is higher than the floor of the club or theater, so the smoke congregates there. Usually, it's not a problem. But sometimes it actually is and I'll be gasping for breath.

Q: What can we expect from your live show at The Bottleneck?

Q: Do you consider yourself a strong live performer?

A: I can carry my own amp and guitar, so yes. Playing live is just a big part of what I consider important. Like right now, I've already recorded some songs, but a lot of times the songs evolve when you take them on the road. Taking them on the road is where you can learn the craft more.

Q: So you don't use any backing vocal tracks like Ashlee Simpson?

A: "No. (laughs) I think on the last tour I did with Canyon (backing me) we had some instrumental tape loops that we played in between songs. That's about it."

Q: It seems Uncle Tupelo is one of the most name-dropped acts of the last decade, from music journalists to other bands. Were you REALLY that influential?

A: I don't know. That's anybody's guess. We probably just represented a band that was doing a certain thing during a certain time period. From our perspective it wasn't like we were doing anything that much different. We were just trying to put our stamp on what we felt was important. But we were influenced by a lot of other bands, whether it was California bands like Minutemen or Meat Puppets or Minneapolis bands like HÃ¼sker DÃ¼.

Jay Farrar and Canyon play Slim's in San Francisco in January. Farrar will perform a solo set at 7 p.m. tonight at The Bottleneck, 737 N.H.

Q: We've heard so many terms to describe the legacy of your music, from alt-country to No Depression to Americana. Which term do you prefer?

A: I can't really endorse any of them. I think Americana is probably the most inclusive because it's more encompassing. You can almost pick it song by song. A lot of songs I do don't really fit into alternative country or -- what was the other one?

Q: What's the status of the Son Volt tour?

A: There's still some things in the works. We are going to play one show -- a benefit show here in St. Louis for Karl Mueller of Soul Asylum (who's recovering from throat cancer) and Alejandro Escovedo (a Hepatitis C sufferer with no health insurance). After that there's talk of doing South By Southwest or touring in the late spring.

Q: What prevented the original Son Volt members from reuniting?

A: I can't really speak for them. I thought everything was headed in that direction. I really wanted to see it happen. But what everybody failed to realize is it's difficult to recreate what you had before. I think people have changed over the years -- it's been like four or five years since we've done it. People develop different commitments and priorities. People change.

A: I probably have, but my motivations and reasons for playing music haven't changed.

Q: How do you differentiate your solo tour material from Son Volt material?

A: The solo stuff is just more open-ended. I don't have a lot of preconceived ideas of what it should be or what it shouldn't be. I just leave it open to whatever happens, happens. Sometimes that may involve me playing a lot of the instruments on a particular song or bringing in electronic sounds just for experimentation purposes. With Son Volt, it's supposed to be more representative of the energy captured when you have a live band.

Q: Have you heard any words yet that you're comfortable with for describing your musical abilities?

A: It's really hard to distill into one or two words or even a phrase, really. Your music is the result of your whole life experience.