Last November Will Ferrell's modest comedy "Elf" was released in theaters, where expectations by its studio were fairly low.

After all, this was a holiday-themed story about a lumbering man who's raised by elves at the North Pole and eventually goes on a quest to New York to find his roots. Not exactly an idea gunning for a Pulitzer.

But after several weeks topping the box office and raking in a staggering $173 million, "Elf" qualified as the biggest surprise hit of 2003.

All the more shocking (and somewhat refreshing) is that New Line Cinema has waited an entire year to release the flick on video in time for this Christmas. The film (New Line Home Entertainment, $29.95) translates well to the small screen, where its easygoing charm finds an even more comfortable fit.

Actor Jon Favreau ("Swingers") takes over the directorial reins. His rather no-frills approach -- which at times is no flashier than a made-for-TV movie -- is upgraded by one major aspect: casting.

The site of the 6-foot-3-inch Ferrell prancing around Manhattan in his jumbo green smock, yellow tights, pointy shoes and conical hat is already funny. But the former "Saturday Night Live" standout throws himself into the role of Buddy with such good-natured abandon that it's impossible not to root for the guy. The selfless character has so much faith in Christmas that he is simply unflappable. 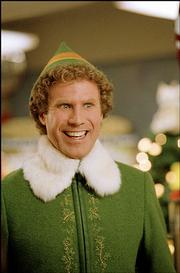 Will Ferrell stars in "Elf," which generated $173 million at the box office.

This is best displayed in an early scene in which Buddy finds work as a helpful holiday elf in a department store. When the Santa-for-hire shows up to meet and greet the kids, Buddy confronts this impostor.

"You sit on a throne of lies!"

Favreau also gets great mileage out of his supporting cast, which includes Bob Newhart as Buddy's adopted father, James Caan as his biological one and Zooey Deschanel as a quirky co-worker. A hilarious cameo by Peter Dinklage ("The Station Agent") takes full advantage of his small height and sizable comic timing by playing an egocentric author who does not take kindly to Buddy's belief that the dwarf is an elf.

Also look for a rare appearance by "A Christmas Story" star Peter Billingsley as a foreman in Santa's workshop.

Although "Elf" turns into a fairly rote holiday yarn during its third act, the movie never sacrifices its gentle charm for cheap gags or gross-out humor.

DVD extras include plenty of games and sing-alongs for the younger set. Plus, there is a featurette on folks who obsess about Santa Claus. Favreau and Ferrell provide commentary for the movie and for deleted scenes.