If it's lost, Found Magazine finds it

... and prints it in the pages of its peculiar but wildly popular ode to voyeurism

By By Alicia Henrikson 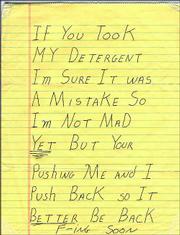 In today's society of niche magazines, Found Magazine sounds like it may be intended for born-again Christians.

You can almost see the concept: pictures of newly repentant sinners on the cover and the story of how they battled their own personal demons on page 18 right next to an advertisement for a television evangelist's Bible-study cruise.

But Found Magazine has nothing to do with religion -- at least not technically. The annual magazine, which is now a best-selling book, features items people find lying around, such as drawings, notes, e-mails, formal letters and photos.

"This is like a game everyone can play," creator Davy Rothbart said. "I think a lot of us are curious about the people around us. These notes and photos, they give us a glimpse into their lives. And some of the stuff is hilarious, but you also have notes that are just heartbreaking."

Rothbart has been on a 50-state tour since April with his brother, Peter. His brother won't be with him, but Rothbart will make a stop at 6:30 p.m. Monday at the Hawk's Nest in the Kansas Union, 1301 Jayhawk Blvd. The event is free to the public.

The brothers have driven from state-to-state in a van, which they've put 35,000 miles on since the start of the tour. The duo didn't drive to Alaska and they will fly to Hawaii later this month. In the home stretch, there are nine more stops on the tour after Lawrence.

Rothbart said he had received even more great finds during the course of the tour.

"But the best part about this tour is meeting people in all these cities," he said. "There's this community of people who get excited about finding this stuff and wonder about who they share the world with. It's just a lot of fun. It's like a gigantic art project.

The idea of creating the magazine came to Rothbart after a girl named Amber put a note on his car that was intended for a guy named Mario.

Amber expressed rage in the note and let Mario know her feelings, telling him she hated him and that he was a liar while using choice expletives. But Amber also told Mario to page her later.

"It was just so angry, but funny," Rothbart said. "She's angry but she ends it by telling him to page her later."

For years, Rothbart collected notes and junk he found on the school bus and walking through parks, but this particular note from Amber was too good not to share.

"I realized roaming around the country that other people had some great find on their fridge at home," he said. "It seemed a shame that only a few people could enjoy it."

Rothbart put up fliers in towns he traveled through asking people to send him their finds. At first, he heard nothing. Then, finds slowly trickled in from everywhere.

Now, he gets about 10 to 15 new finds in the mail daily and several e-mails. Some go into the annual magazines. Others went into the book, and some are put on the magazine Web site, www.foundmagazine.com. Bitner also recently launched Dirty Found, which Rothbart hasn't had a chance to see because he's been on tour. But he's familiar with the material. 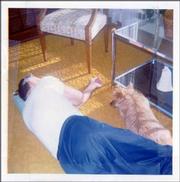 He knows some of it includes pictures of people's private parts.

"You never realize how many people are taking those photos, and then losing them is just bizarre," he said. "Some of it is not that complex. But then there are other things that have some person's sexual fantasy on one side and then, like, a grocery list on the other side. It's perverted and kind of weird."

Found Magazine is like a patriotic project for Rothbart.

"Not in a flag-waving sense," he said. "But you see things from all parts of the country. And these are people who aren't always represented and you don't hear about, or parts of their life they wouldn't discuss with strangers."

He said the finds can challenge people and possibly help them realize there's more to people than what they see.

It's sort of like the '80s hit movie "The Breakfast Club" for readers.

In the most recent magazine, one page features an essay by a guy named Joe who thinks rock bands Marilyn Manson, Korn and Tool deserve more respect.

Another has a list of "Star Wars" figurines a person has and still needs.

Flipping to another part of the book, there's a letter from a young girl named Eliza to her parents asking them stop doing drugs in their house because she's worried they will be kicked out.

Sometimes the story behind the find is even more interesting than the find itself -- like the a piece of paper sent in from a Houston couple with the words "I hate Alton" written over and over again on it.

"The note they sent explains they were at the supermarket and waiting for their turn in line," Rothbart said. The couple noticed the cashier was furiously scribbling something down as she rang up customers and then tossed the note aside. Curious about what the cashier was writing, the couple snatched up the note.

"They thought it was pretty funny," he said. "Then, they got to the bagger and they saw that his name was 'Alton.'"

Check out the photos...