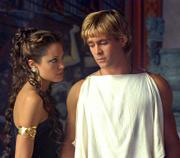 Alexander the Great joins Julius Caesar, Genghis Khan and Napoleon as one of the great military conquerors in history.

Likewise, "Alexander" should join "Ishtar," "Heaven's Gate" and "Gigli" as one of the biggest cinematic bombs of all time.

"His failures tower over other men's successes," a rambling Ptolemy (Anthony Hopkins) says of the title character.

That same phrase can apply to writer-director Oliver Stone. The Oscar-winning filmmaker hits his career nadir with an embarrassing period piece that manages to be boring, overly long (3 hours), confusing, implausible and incapable of creating a single character who can engage the audience.

"His failures tower over other men's successes," a scholar says of Alexander the Great (a miscast Colin Farrell). That same phrase applies to writer-director Oliver Stone, who hits his career nadir with an embarrassing period piece that is boring, overly long, confusing, implausible and incapable of creating a single engaging character.

Stone had trouble finding an American studio that would fund this $150 million epic. (Warner Bros. is merely distributing it.) So Stone convinced the German company Intermedia Films to sink its entire fortune into his dream project.

It may prove to be the worst German strategic decision since the invasion of Russia in World War II.

Dark-haired Irish actor Colin Farrell is the natural choice to play the blond-haired Macedonian Alexander. Yet the swarthy Farrell (apparently borrowing Freddie Prinze Jr.'s wig from "Scooby-Doo") is only the third most miscast person in the movie. The first is Angelina Jolie, who stars as Alexander's witchy mother Olympias. It's somewhat distracting that Jolie is only 11 months older than Farrell. It's downright giggle-inducing that she pretends to be his mom without a hint of aging prosthetics or cosmetics.

Hey makeup department, couldn't you have given her some crows feet or gray hair?

Then there is Val Kilmer, who portrays King Philip, Alexander's one-eyed lout of a father. Stone previously culled a memorable turn from Kilmer in the otherwise annoying biopic, "The Doors." Conveniently, Kilmer gives the same performance in "Alexander." It could just as easily be the drunken, self-absorbed, borderline psychotic Jim Morrison seated on this Macedonian throne.

Warriors exhibiting budding mascara trends in Macedonia and elsewhere in the ancient world.

Stone takes this fascinating figure and reveals nothing about him. The actor's dialogue (co-written by Stone, Christopher Kyle and Laeta Kalogridis) consists entirely of platitudes such as "Conquer your fear and I'll promise you'll conquer death" and "Fortune favors the bold."

It's a complete mystery what drives Alexander, the circle of friends and family who surround him (especially his innately hostile barbarian bride played by Rosario Dawson) or the men who follow him to the ends of the earth. These individuals look like they're going through the motions of history that have been heaped upon them in retrospect by the filmmaker. At no point do any of them seem like actual people.

With its rampant homoeroticism, elaborate costumes and jumbled fight choreography, one would assume this is a Joel Schumacher flick not an Oliver Stone production. The only real hint the project is helmed by the director responsible for "Platoon" and "Natural Born Killers" is a few trippy snippets such as when the king is plagued by fever. Otherwise there is little about the film's conceptualization that is distinctive.

If the picture had come out two years ago, a few of the scenes might have earned some points on the "spectacle" meter. But the infinitely better "Troy" already did the Bronze Age saga some justice earlier this year. And "The Lord of the Rings: The Return of the King" proved how to expertly craft large-scale warfare between an army on elephants and one on horseback - which is regrettably the same action climax of "Alexander."

Considering so many recent movies have staged phenomenal battle sequences, it's amazing that Stone - a veteran who's participated in actual combat - manages to make them wholly uninvolving. The edits are too quick and there is never a clear sense of who is doing what. Both major action centerpieces imply Alexander's troops are on the verge of being defeated, only to cut to a later scene where his armies are celebrating their victory.

It's unlikely there will be much celebration in Stone's camp after his dull behemoth drowns at the box office. He has succeeded in making the year's worst film. In some respects, that truly is an epic achievement.

Having seen a few reviews, I was wondering if my friends and I would be the only ones in the theatre. There were more customers, but the venue wasn't close to full.

The people who didn't go--it's their loss. This movie is much, much better than you're being led to believe.

Oliver Stone is a director I admire and who also pisses me off. That's what I think we should look for in movie makers and other artists. I don't 100% like everything he's done, but when I watch a Stone movie I know I've seen something with ideas and guts. Not many Hollywood films have either.

This is a creative, brave movie in several ways. Stone deals with topics such as bisexuality in an inconsistent way, but his effort is admirable. The actors have very difficult jobs in this movie and mostly, they succeed. There are no great individual performances but as a unit the cast is committed and convincing.

I found the film hard to follow sometimes, but that was mainly because I concentrated on the visuals. Stone's style is impressive, more in your face than ever. Unlike most battle scenes in movies, which on some level have something to pull you in and start rooting for the good guys, these battles are disorienting hells that condemn violence forcefully. Stone shows the physical and psychological destruction of war memorably.

If you give this movie a chance, overlook all the wiseass comments about hairstyles, accents, and some people's problems with homosexuality, you may find yourself challenged as well as impressed and entertained.

I'm really glad to see Haley joel osment in this new movie, it's been a while since Secondhand lions and I couldn't wait till he was cast for another part. He's a very talented actor.