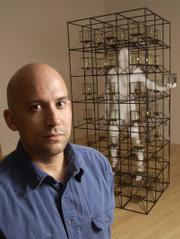 KU graduate Marc Berghaus is showing his sculptures at the Lawrence Arts Center gallery through November. Berghaus is pictured with his piece Rules & Regulations #2.

Berghaus' mindscape is an anxious one, but he doesn't leave its manifestation to insomnia or ulcers. Instead, when elements of chance don't fall his way, he'll twist, tear, or smash them to atoms.

"Rules and Regulations," a series of Berghaus' sculptures and photographs on display through Nov. 30 at the Lawrence Arts Center, grapples with life's unpredictable and uncontrollable elements by combining surrealist, minimalist, and even arts-and-crafts architectural influences into his kinetic sculptural "machines."

Between the two World Wars, surrealist artists and writers explored chance with dreamscape paintings, exercises in "automatic" writing, and collage. According to Andre Breton's "Surrealist Manifesto," these expressions were presented as objects stripped of conscious manipulation, "free from the exercise of reason and from any aesthetic or moral purpose." To some degree, the surrealists were putting forth a fatalist attitude, as well as searching for a purer world. World War I had wreaked havoc in Europe; scarred, many artists retreated into the belief that we are all victims pushed by chance. No sense in fighting against it.

In contrast, Berghaus' sculptures are aesthetically beautiful works rife with anxiety, but comforting in their proactive--if not quixotic--attempt to conquer.


Sculpture and photographs by Marc Berghaus Open to the public Mon. thru Sat. at the Lawrence Arts Center until Tuesday, November 30 Full event info

In "Rules and Regulations #3," glass bottles are suspended from a wood grid. Each bottle holds the shattered or torn debris of dice, cards, weather reports, coins, or mathematical formulas. The artist's statement explains that for an entire day, Berghaus attempted to predict the outcomes of various games of chance. When the results were not in his favor, he obliterated the objects. "For one day, I was able to defeat chance," his artist's statement asserts.

The most striking sculpture is "Rules and Regulations #2." A life-size fiberglass nude male form is impaled within a Sol LeWitt-style minimalist gridwork. The metal slides through the figure's legs, shoulders, gut, and neck. Inside each square of the grid is a brass fish, which slowly rotates. The only free limb of the male figure extends outside the grid and holds a small box of water housing a live betta fish, whose movements are expressionistic in contrast to the motorized, rote, artificial images.

It's a compelling statement on the thinness of freedom. Relating to the human form, the viewer assumes that surely he wants to be free of the grid, yet the free arm is shackled with the responsibility of the live fish, who isn't very free, either.

Detail from "Rules and Regulations #2."

Equally dark is "Rules and Regulations #7," a small, poetic, kinetic sculpture. Small brass shapes reminiscent of whale fins slowly rotate on a wheel; below on another wheel are small images of men falling. At times the fins and men come within millimeters of meeting, eliciting a sense of terror. What's to happen? The human images are trapped, falling, and within a hair of being sliced by these strange forms coming at them. Relating as one of the men, it's a dark scene; separated from it, somehow it becomes humorous. Poor bastards, one thinks. Glad it's not me!

Berghaus' sense of wit is brought to the fore in the large installation piece "Rules and Regulations #1." Consisting of six absurdist machines that convert everyday objects into milestones of life phases, the products of one's personal-yet pedestrian-life story are displayed as if candy in a penny store. (Berghaus, in his artist's statement, credits as an influence a scene he witnessed in which the owners of Penny Annie's tried to move an antique candy display counter up a staircase.)

Credit card offers are shredded, molded into bricks, and covered in gold leaf; sports trophies are crushed and reformed into artificial knees and hips. The final "product" of one's life, evidently representing the metaphorical footstep off this mortal coil and a hope for an afterlife, is represented by a tapestry of religious texts. Berghaus cut pages of the Bible, the Koran, Buddhist scripture, Lao Tzu's "Way of Life," and the Upanishads into strips, then wove them into a tapestry reflecting a new, oblique path.

The surrealists introduced this technique of language fragmentation to a broader audience. They would cut words from the newspaper and rearrange them into random, nonsensical order. The practice is still relevant to contemporary artists; Jeff Tweedy used the cut-up technique in Wilco's 2001 "Yankee Hotel Foxtrot" ("I am an American aquarium drinker / I assassin down the avenue"). Likewise, Berghaus' tapestry reveals a strange play with the journey to the Promised Land (so to speak). For instance:

morality, trance, and wisdom), and they all admonish us to

judgment now of a long time lingereth not, and vomit

again; and the sow that was washed 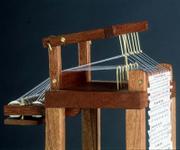 Detail from "Rules and Regulations #1."

In the artist's statement, Berghaus explains that the images for his works appear randomly in his mind, and then "I just build them." The image-to-object approach to the exhibit leaves it somewhat disjointed thematically--he is a prolific artist working in dueling mediums--but "Rules and Regulations" comes together nonetheless as a statement to the raw voice of the mind.