A conventional action title that still proves to be fun. 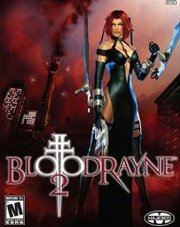 BloodRayne 2 hits the gaming waves with a lot to prove. Not that the previous outing was bad. In fact, it was quite fun and stood out slightly in the action genre with its keen sense of style. But, does the sequel have what it takes to still stake a claim among the crowded third-person action scene?

BloodRayne is a female dhampir, born from the unnatural union of vampire and human. This imbues her with powers of a vampire but cursed with the unyielding thirst for blood and an obvious fatal allergy to sunlight. Rayne travels from city to city destroying enemies with blades, guns, fatalities a la Mortal Kombat, all while swinging off poles and objects to make for some nicely varied gameplay. You can even attack with special rage moves and execute over 30 different combos.

The game controls really well and the analog sticks are very responsive. Many of the flipping and swinging elements really remind me of Prince of Persia. In other words, the game borrowed from a great example. Still, despite all of the new elements, wonderful presentation, great architecture and good voice acting, it kinda feels like more of the same. There's nothing truly spectacular or innovative about it all. Some of the boss battles are pretty fun and the game does have its moments. But none of these parts add up to be anything brilliant.

BloodRayne 2 has a great sense of style like its predecessor and is a fun game on its own. Although it brings nothing terribly new to the genre, it will provide a nice weekend diversion.