Nintendo brings more to the court and scores. 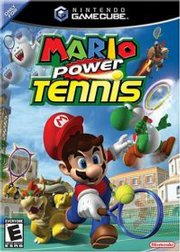 What? Another Mario brand again? When are we going to see the end of these Nintendo shenanigans? Well, if the big N is smart, we'll never see the end of it. Mario has become the Midas of the video game world, for the most part. Save for very few titles, you can bet that if Mario is in the name, you are in for a solid, enjoyable and usually innovative experience. That doesn't stop with Mario Power Tennis.

Mario Tennis exploded onto the Nintendo 64 with much success, offering some gameplay twists on the skill sport. In Mario Power Tennis, each character has their own special moves and augmented shots that really twist the table into not only a great version of tennis, but a delightful mind game of "rock, paper, scissors."

There are also new types of courts outside of hard, clay and grass. The new gimmick courts allow for some pinball-esque arcade play. With several colorful landscapes from the Mario worlds and different pulleys, obstacles and enemies to avoid and overcome, Mario Power Tennis takes on a different and welcome feel. The regular game still feels like a decent tennis simulation underneath, but the gimmick courts completely throw that out the window and let you experience a pure zany side of the game.

When playing alone, there is a ton of games and things to unlock. The normal difficulty is way too easy, but going forward to the higher challenges is pretty rewarding and can last you in the double digit hours. There are several types of characters to choose from that have certain skills to better suit your playing style.

Multiplayer is where Mario Power Tennis hits its stride, though. The multiplayer mini games are completely engrossing and rival that of the Mario Party games. By far, actually. Also, playing the normal tennis game in doubles is a thrill. It has to be on of the best shared-TV multiplayer experiences to hit the console since Mario Kart: Double Dash.

The graphics are really colorful, spanning all different palettes of Mario and Wario worlds of new and old. The game runs smoothly without a hitch and is just plain fun to look at. The sound effects and music are cheesy at times, but none of it strays from the traditional feel of a Mario title.

Mario Power Tennis is a robust tennis title that anyone can enjoy. Although it definitely feels like more of an arcade-style version of its predecessor, that fact doesn't discount that the game is incredibly enjoyable no matter what mode you are playing.