Lawrence Police officers work the scene of a one car accident at the corner 14th and Mass. Street. The accident occured sometime early Thursday morning.

TRUCK STOP LOVE IS DRIVING ME MAD, MAKING ME CRAZY, CRAZY: Police arrested a 30-year-old KU student who they said tossed a rock through the front window of The Bottleneck and later rammed his car through the front of J. Gladman Gallery -- all after being refused free drinks while claiming to be a member of recently reunited '90s Lawrence band Truck Stop Love. The student played guitar in the band for about a year in the early 1990s, drummer Eric Melin said.

ACTUALLY, THEY DIDN'T BLAME THE SMOKING BAN: Hannahs, an appliance store that had been in downtown Lawrence for 58 years, will close at the end of the year. Owner Jerry Grammer said new competition from "big box" stores on South Iowa had killed the business. 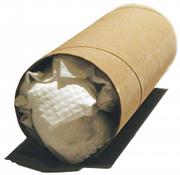 JUST WHEN WE WERE GETTING RID OF OUR SECONDHAND SMOKER'S COUGH: The Lawrence City Commission said it would consider a compromise to its smoking ban that would allow bars and restaurants to install high-tech filtering systems. But commissioners warned they might not approve the proposal.

A HECK OF A HEADACHE: Lance Cpl. Ryan Chapman, a Marine from Lawrence, received a gunshot wound to the head last week in Fallujah, Iraq. But the wound was relatively minor, four inches of stitches along the left side of his forehead. "It cracked my skull, but I think it looks worse than it is."

THAT'S WHAT LITTLE GIRLS ARE MADE OF, UNTIL PROVED OTHERWISE IN A COURT OF LAW: A Leavenworth County transsexual was found not guilty of misleading authorities after she applied for a marriage license and listed herself as a woman. Sandy Gast's original birth certificate indicated she was born a male, but a judge said Gast did not intend to lie when she represented herself as a woman.

Salvation Army bellringer Mike McKeehan, Lawrence, thanks Megan Towle, 6, Lawrence, as she drops some coins in the kettle outside the Dillons Store on 23rd Street. McKeehan and other bellringers started the annual fund drive Saturday and they will continue ringing through Dec. 24.

FEWER ANGELS GETTING THEIR WINGS: Lawrence Salvation Army officials say they're facing a serious shortage of bell ringers for the agency's annual fund-raising drive. Last week, only nine ringers showed up to staff the 19 locations the Army has around the city. That might results in tens of thousands of dollars lost in funds the Army uses to run throughout the year. For info about volunteering, call 843-4188.

IF ONLY THEY COULD BAN FRED PHELPS, TOO: The Topeka City Council last week approved an ordinance prohibiting bias based on sexual orientation in city hiring or employment. Council members stopped short of a broader ordinance against discrimination in housing, lending and private employments. Lawrence has included sexual orientation in its nondiscrimination law since 1995.

NOW, IF THEY CAN ONLY GUARANTEE FUTURE BAR TABS: Kansas University is considering a new "guaranteed tuition" plan that would lock in tuition rates for four years for incoming students. The proposal would help students know in advance just how much money they'll need to pay for their education ... instead of being "surprised" by the inevitable yearly tuition hikes.

ROCK CHALK, JAYHAWK, PAY LEW! Ushers at Allen Fieldhouse may lose their jobs as Manpower, the company that currently manages them, is getting out of the business. The new company, Crowd Systems, may hire new staffers for games.

A SHOCKING DEVELOPMENT. TRULY, IT'S ELECTRIFYING. PEOPLE WILL BE BUZZING ABOUT IT: The Douglas County Sheriff's Office has developed a "use of force" policy for Taser "stun guns" deputies will soon carry on patrol. The policy would not allow deputies to use the Tasers on verbally abusive suspects - only people who are actually assaulting officers.

NO. WE REFUSE TO MAKE A MONICAL LEWINSKY JOKE: Bill Clinton opened his presidential library in Little Rock, Ark., to house documents and memorabilia from his eight years in the White House. U2 performed a three-song set before Clinton spoke.