The best stays the best...barely. 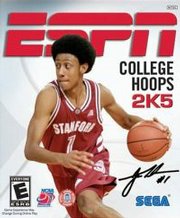 If there's anything I would expect out of ESPN videogames, it would be another $20 winner that trumps the double-priced competitor. Even though ESPN College Hoops 2K5 boasts some features that are sorely missing from EA's hoops game, what results is a stiff, unbalanced and inaccurate successor to last year's joy.

Immediately on the court you get used to the two passing buttons popularized by ESPN's NBA counterpart. You can do a straight pass or a lead pass which hits your teammate in stride. The new free-throw system is incredibly simplified this time around. Instead of a meter, all you have to do is hold a button and release it right before the shot goes off. Since each person has a different way to shoot, it forces you to learn several different timings for a free-throw shot. It's an interesting change, but it's severely dumbed down and will cause many senseless bricks.

The biggest drawback to this year's title is the stiffness of the Isomotion. There seems to be an invisible wall around all defenders that even the most talented of ball handlers can't seem to get around. I even changed one defender's defensive statistics to literally zero and raised the point guard's handling and offensive skills sky high, and it was still as difficult to shake off the defender in a one on one situation. Not only that, but the statistics for the top 50 schools and their players seem to be fairly amiss. For instance, Jeff Hawkins has significantly more skills than Christian Moody for Kansas University. What?

The Legacy mode is deep and engaging as ever. You can adjust all coaches and how they attack training, scouting and recruiting. You can even get so lost in the mode as to balance the budget. Unfortunately for ESPN, EA's offering made the necessary strides to catch up with the deep customization addictions with its PDA system. In Coach mode, you can totally control your team by calling the plays directly and watching your team execute them.

Man, I love Jay Bilas, though. The commentary by Bilas and Mike Patrick definitely has some awesome insight and it never gets old. Sure, it's natural to eventually hear repetition, but Hoops 2K5 does a remarkable job keeping it to a minimum. Also, Hoops is the only one that has the announcers call the names of the players int he play-by-play. Sure, you have to put in the names yourself, but coincidentally, every last and first name of every NCAA player has been recorded so that it transitions smoothly.

The player and stadium models look awesome. The top tier schools get their mascots and fight songs included. Most of the chants, however, remain generic throughout the game. The audience models are 3D, but barely. They aren't made up of more than 13-14 polygons each so that the RAM can render it all. It looks fairly wonky up close. Still, the ESPN presentation is still great, despite a menu navigation and load system that is still counter-intuitive.

ESPN College Hoops 2K5 doesn't play as smoothly as its predecessor, but still winds up being fun and quite a bargain for a mere $20. But this year, you may want to consider EA's $40 offering as well, even though nothing beats ESPN's feel and presentation.

would you say the NBA version is better?