Comedians ponder the dividends and dangers of improvisation

At least that is the most common complaint about Colin Mochrie and his cohorts who have popularized improvisational comedy through the TV series "Whose Line Is It Anyway?"

The jokes are too hilarious, the quips too speedy. No human could possibly create that stuff on the spot, right?

"Nobody ever actually believed that we were making it up," Mochrie says. "I think it was worse for the people who did the songs. It seems like it's the sort of thing where people thought, 'I can't do it, so how can they? It's just not possible.'

"My thing is, 'I can't do brain surgery, but I KNOW they're doing it. They're not faking it.'"

The irony of "Whose Line" and Mochrie's latest network endeavor, "Drew Carey's Green Screen Show," is that the spur-of-the-moment material is always so much funnier than most sitcoms where writers spend weeks tooling every line.

"If you actually transcribed the show, wrote the scenes down, then gave it to a bunch of sketch actors to do, it wouldn't be funny at all," admits Mochrie, phoning from a Minneapolis airport. "Half the scenes make no sense. It's just one of those things where every scene was the moment. It was truly a case of 'You had to be there.'" 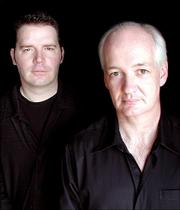 Brad Sherwood, left, and Colin Mochrie will bring the improvisational skills they honed on "Whose Line Is It Anyway?" to the live stage.

The balding Canadian with the hangdog expression and his fellow "Whose Line" buddy Brad Sherwood will give Lawrence audiences an opportunity to "be there" when the duo performs Sunday at the Lied Center.

What can viewers expect?

"Wackiness," Mochrie says. "It's very similar to the show. We play a lot of games that 'Whose Line' fans will recognize. Then there are games that, because of the time constraints of television or other reasons, we never had a chance to do. We actually do a game called The World's Most Dangerous Improv Game. It involves 100 live mousetraps and Brad and I barefoot and blindfolded. It's sad, but it's true."

Although there are thousands of exceptional actors or musicians who could probably exchange gigs with little variation in talent, far fewer people seem to occupy the upper echelon of the improv comedy field. It may be that rare skill individuals are born with rather than something they develop.

"Improv is something you can learn; you can learn the rules and practice and keep sharp," Mochrie says. "But you do need some innate quality. I've seen people who have been technically sound, but they just don't have that 'whatever it is' that makes someone REALLY funny."

Colin Mochrie & Brad Sherwood from "Whose Line is it Anyway?"

Some samples of Mochrie's highlights from "Whose Line" include a game called "One-Syllable Words," in which he and a partner were given a setup scene and couldn't use anything other than sentences comprised of single syllables. In one instance, he portrayed a drill sergeant at boot camp. He opened the bit by barking at a recruit, "Drop and give me 10. Twice!"

Another was in a round of Scenes From a Hat, in which he was asked to croon "unlikely first lines of love songs."

Even though he has spouted thousands of wisecracks and witticisms during his shows, he is hard-pressed to cite any favorite examples.

"One of the things about improv is as soon as you're done, it's gone from your mind and you're on to the next thing," he says. "I know there was a lot of funny stuff said, but I can't remember any of it."

However, one such game did give Mochrie a nickname that now permanently follows him around.

"That was a superhero game we play where everybody comes in and they're nicknamed by the person before them," he recalls. "Since I was the first one, for some reason -- I'm not sure why -- they came up with the name Captain Hair. And it seemed to stick, much to the delight of Drew Carey."

Brad Sherwood, left, and Colin Mochrie will bring their improvisational act to the Lied Center. The regulars on "Whose Line Is It Anyway?" will perform at 7 p.m. Sunday.

Although Mochrie is a mainstay in a variety of Canadian TV shows and occasionally turns up in Hollywood features ("The Tuxedo," "Lucky Numbers"), the 46-year-old is tackling a new project: writing.

Mochrie and his comedian wife Debra McGrath are busy fine-tuning a sitcom pilot for the Canadian Broadcasting Corporation.

"This was the first time I ever had to write something, and I discovered I absolutely loathe it," he says. "It's horrible. I don't know how people do it. ... I enjoy the collaborative effort of improv. Writing is so solitary and lonely. It really screwed up my wrist muscles."

Fortunately, Mochrie can stretch his legs during the next few weeks when he and Sherwood take to the road. The humorist enjoys being able to tour with Chicago native Sherwood, who he says comes across much stronger live than on "Whose Line."

"He has an amazing vocabulary," Mochrie describes. "He's very witty. I think one of the best things that come out of the live show is that people can see how funny and talented Brad is. I don't think he really got much of a chance on 'Whose Line' because he was usually stuck in musical games and maybe a couple of other ones. In the live show, because it's just the two of us, he really gets a chance to shine."

While these onstage performances are filled with energy and laughter, Mockrie claims the backstage high jinks of the tour will never be confused with those of Mtley CrÃ¼e.

"We joke that if we ever had a documentary crew follow us it would just be the dullest experience involved," he says. "We usually get there a couple hours before the show, do a sound check then sit and play cards. Then we do the show. I wish we sacrificed something to a dark lord, but no."

While there won't be any official sacrifices at these events, Mochrie reveals "blood has been drawn a couple times" during the World's Most Dangerous Improv Game.

He adds, "Which just makes it funnier."