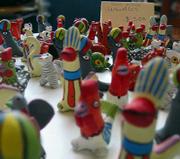 Nor did she particularly care for the "Weird Al Live" DVD, the duct tape hat or the body stapler kit.

Grandma's pissed, and you'd better do something about it. Maybe you should do what Mary Kuhn did for her Grandma last year:

She gave her a goat.

"...er, gave a goat in her name, I mean," said Kuhn, a coordinator for the Fair Trade Holiday Market at Ecumenical Christian Ministries.

Kuhn is representing the Heifer Project an organization that helps deliver sustainable food sources like cows and goats to needy families at this year's market, which will be open Nov. 26-Dec. 2. The market offers goods exchanged through fair trade practices, which help ensure that oft-exploited artisans and farmers from developing nations get a respectable kickback.

at the Ecumenical Christian Ministries, 1204 Oread Ave., until Thursday Dec. 2

"Good fair trade is going to get farmers about $1.20 a pound (for coffee) instead of what they usually get maybe 20 cents a pound," said Thad Holcombe, ECM director and coordinator of the annual market. "We realize there are a lot of issues with corporations and governments etcetera, but we also have a lot of power as consumers."

"This is great way to do guilt-free shopping," Kuhn said. "A lot of it is handcrafted, so you can feel good about the things you're buying." 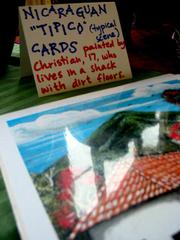 One of the items on sale at the ECM's Fair Trade Market.

Here are some other options for the socially conscious holiday shopper...and/or for those who don't want to negotiate the shopping madness on south Iowa Street:

The "Is this fine art or charity?" gift

When it comes to supporting the needy, artists are at the top of the list.

Lawrence's myriad galleries cater to all types of budgets, and many go out of their way to provide beaucoup options for the holidays.

The Olive Gallery will open its "Holiday Olive Soiree" the day after Thanksgiving and stay open though Dec. 29. The show will feature work from more than 25 local artists as well as letterpress cards from Kansas City's Hammer Press and grab bags from expatriate comic artist Travis Millard. 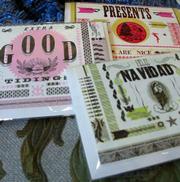 Greeting cards by Hammerpress, available at The Olive Gallery. 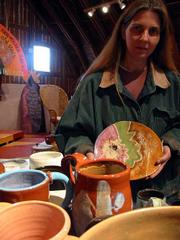 Amy Carlson with some of the creations made at Day In Clay Studios, which is open to the public Saturdays and by appointment.

"We just asked all of our artists to bring in brand-new stuff," said gallery owner Jill Kleinhans. "We're going to have a huge supply in the back so when one piece sells we're going to bring another one out."

If making your own art is more your style, A Day in Clay Studios offers kids and adults a chance to make their own pottery and ceramics. Ceramics artist and teacher Amy Carlson opened the studio last May at a rural location a couple miles south of town and recently opened it to the public.

"It's all a big experiment, but it's been a good one so far," Carlson said. "Some people will really step up to a challenge and try something totally difficult."

Mugs, bowls and tiles are most common, Carlson said, but kids can also use the studio's resources to create everything from volcanoes to mini-racetracks to head-and-shoulder busts.

"My feeling is if they have the idea they're halfway there," Carlson said. "Everybody works at their own pace and we're just happy that they're interested in being creative."

A full list of local galleries can be found here.

The "Is this rock and roll or charity?" gift

Sure, you could buy your little bro Snoop Dogg's "Rhythm & Gangsta: The Masterpiece" for Christmas. But then you'd run the risk of doubly offending him: (1) with the D-O-double-G's watered-down, neo-soul beats and tired, misogynistic lyrics (as if "Can You Control Ya Hoe?" is really gonna get your bro to second base); and (2) with the fact that the only dudes seeing a dime from your purchase are some soul-sucking, ponytailed executives in the corporate offices of Geffen Records.

The good news is you can sleep at night by buying little bro any of the choice releases put out this year by local bands (check out our Best of 2004 list here, all our reviews here and download sample tracks from our mp3 archive). New albums from The Get Up Kids, Old Canes, Arthur Dodge and Kelly Hunt were among the local best-sellers this year at Love Garden and Kief's Downtown Music, which both carry more than 200 local titles. 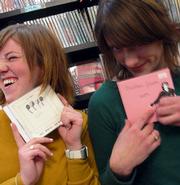 Love Garden employee Kelly Corcoran said local CDs are unique in that the artist actually gets 80 percent of the sale price.

"We don't really want to make tons of money off of them," Corcoran said. "Usually if somebody consigns something here they already shop here."

Buying local music can help save those CDs from an imminent trip to the Social Service League (where Love Garden's forsaken overflow usually ends up), or -- in Kief's case -- the sidewalk sale.

"The majority of local artists that consign, if they sell one copy, they're lucky," said Kief's assistant manager Mark Roseberry. "Most of them are too busy giving away free CDs to their friends, who are unfortunately the people that would probably buy them anyway."

If you think scooping up your cat's meager poop offerings every other day is a hassle, try working at the Lawrence Humane Society they go through a trash can of litter every other day.

The non-profit agency typically houses more than 200 cats, 200 dogs and a grab-bag of birds, rabbits, ferrets, hamsters and whatever else decides to wander away from home (a five-foot iguana enjoyed a recent stay). The agency relies largely on donors, to which end people can make a donation in someone's name and get a pretty card with the Humane Society stamp to put in that special someone's stocking.

"Every little bit helps," said office manager Ramona Kemberling. "We had a little boy come in with change in a baggie from his Bible school class."

The money goes towards daily expenses like utilities and employee salaries as well as supplies like food, litter and cleaning supplies.

"I can't imagine anybody more needy than a homeless animal," Kemberling said. "At least people can go out and ask for money."