The premier launch title for the DS is here. 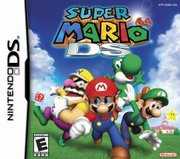 Super Mario 64 will always be known as one of the greatest video game breakthroughs of all time. It was the first successful platforming franchise translated into the 3D realm with utmost genius. Mario went into several different worlds, performing different tasks in each level to collect stars:it was brilliant.

Simply translating it to the handheld wouldn't be enough of an incentive to buy it, so Nintendo packed new levels, stars, characters and tons of stylus-heavy mini-games into this massive and fun DS iteration.

Instead of starting out as Mario, you actually start out as his dino pal Yoshi. Like in past games, Yoshi has a double floating jump and can eat enemies. This changes the dynamic of the game right off the bat. In the first level, you'll notice there are a few things changed. Nintendo altered many of the levels to make the adventure fresh for everyone. Soon, you will be able to play as Mario, then Luigi and Wario in this massive battle against Bowser. 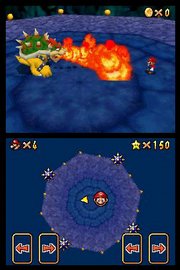 You can use the D-pad to run in the environment or use the stylus on the map screen to point in your chosen direction and run. I found myself using both depending on the situation. But more often than not, I just let the bottom screen act as the map. Although if you miss the analog sensitivity of the Nintendo 64 stick, you can use the stylus to adjust how quickly your character can run.

The main adventure is great but the mini games in the "Rec Room" are 64 DS's bread and butter. Almost every game is incredibly addicting. Each one is specifically engineered for the touch screen and stylus. Most of these mini games require you to unlock them by catching different rabbits that appear in the adventure mode. One game has you pulling back and releasing a slingshot at b-bombs by touching the shot and dragging the stylus back far enough to the force you want the shot to go, then releasing the stylus to release the slingshot. Awesome. Some games simply have you touching falling Marios to make them jump on enemies before they fall off the screen. Some are as simple as finding a character in a sea of faces "Where's Waldo" style. There are so many and I can't stress enough how addicting the Rec Room is. If anything, it's a brilliant display of how the DS's technology can be used.

The sound is bright clear and very reminiscent of the pure stereo sound of the Nintendo 64. A truly wonderful aural experience. The graphics are a bit aliased and angled, but by no means bad. As the DS moves along, developers will learn how to harness its true power.

Super Mario 64 DS is the one title you shouldn't pass up upon the launch of the DS. It's the one game that fully realizes the hardware's potential and as a stand alone game still stands the test of time as a great platformer.

I had the original, and this is, by far, and improvement. I loved playing as Yoshi, as I've always been a Yoshi fan.

The only part I found frustrating was the final fight against Bowser, where you basically were forced to use the touch screen, regardless if you sucked with it or not.