By By Lauren Airey - Journal World

Tonganoxie — Saturday night in Tonganoxie is all about the slow country drawl -- the kind where people say Missour-ah instead of Missour-ee like they're in no big hurry.

It's about coming out early to play checkers and get a sneak peek at the playlist of classic country tunes during the sound check. And it's the scent of a grandmother's musky perfume mingling with the smell of popcorn and sawdust in the lobby of a converted barn on Main Street. 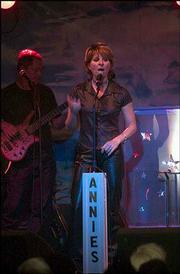 They've got a saying at Annie's Country Jubilee: "Keep it country." And that is exactly what Annie Dunavin is trying to do with a weekly live music revue, featuring a five-piece house band and multiple vocalists.

"I was raised on a farm and we had two albums of two different country music singers," Dunavin said. "When I was driving a tractor and farming at 10 years old, I'd be singing out in the fields. I never took any music in high school and whenever I come home for class reunions, people would say, 'I didn't know you could sing.' I just said, 'I didn't know I could sing.'"

Annie surprised herself and her new husband on their honeymoon almost 15 years ago with her newly discovered ability. When Terry Dunavin came out of the bathroom in a small bar in Florida, the one-man band was introducing a special guest singer from the audience: Annie. A few years later, she entered a singing contest at a festival in Allerton, Iowa, and surprised herself again by taking second place.

"I'd never done that before and it just wanted to try it out," she said. "It got in my blood and once it's in your blood, you can't get rid of it."

Back home, she auditioned at Glen's Opry in Tonganoxie -- now Annie's Country Jubilee -- and sang there once every three months or so for about nine years.

"I remember being scared to death at that audition," she said. "I never thought we would someday own the show. This was my favorite place to come of all the opry shows because the band was just the absolute best in terms of talent and personality."

When Glen Smith decided to retire from the opry business, the Dunavins jumped at the chance to own their own show and put their years on the road to use.

"We'd always wanted our own opry show, but we never dreamed we could buy one just 10 miles north of our home," she said. "Every time we went to a different opry show, we saw things we really liked and we saw things where we said, if we ever owned our own show, we'd do it different."

With the best interest of the couple's new project in mind, she backed off the singing for a little while until she could handle the balancing act of duties.

"After two or three months, I could put the business person and the entertainer together," Dunavin said. "I've even been back here cooking hot dogs and gone out on stage wiping my hands on a towel. That's how country we are."

Although the old livery stable at Fourth and Main has been Annie's Country Jubilee since June 2003, the biggest changes won't be visible for at least three or four months. New dressing rooms for the musicians, a Green Room for special guests, living quarters for the Dunavins, a larger stage and a new lobby should be ready by New Year's Eve.

"We're hoping to get some Nashville stars to come up once it's finished," Annie said. "Of course, it won't be anybody like Faith Hill, but some of the classic country singers. We're hoping for somebody like Porter Wagner or Connie Smith."

The regulars don't seem to mind the changes to the building or the new management, and this crowd would let Annie know if they weren't happy. With changing theme nights -- Cowboy Night this Saturday and Oldies Night last week -- regulars like Martha Cares come almost every weekend to watch the show and help out behind the scenes.

"I think it's really going to be a big attraction for this part of the country," said Cares, of Lawrence. "You could go up there and talk to any of those people and they'd introduce themselves and show you around. And it's not like it's thrown together. Annie does some comedy and that band could go against anybody from Branson."

The band has been rendering classic country together for about eight years now. Fred Uzzell, who plays the steel guitar at Annie's, prefers the older style of country music because that's what he grew up with.

"If you want to play in a place where the people are nice, it's really a musician's dream here," Uzzell said. "You're not hauling equipment out at 3 in the morning, fighting off a bunch of drunks."

Dunavin added, "We've had a lot of people compare this show to the Branson-style show, especially the band. ... Once we get people in the door and they see one of our shows, they say, 'We'll definitely be back.'"