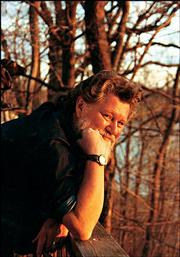 David Yeadon is the author of "Seasons in Basilicata," published by HarperCollins.

After spending a year in Provence or lounging under the Tuscan sun or riding the Patagonian express, readers of contemporary travel writing can be forgiven if they've become a bit jaded by the quirky plumber or the telephones that never work or the balky bureaucracy of whatever country the writer has chosen.

In each, there's always that special place that beckons the cognoscenti, the unique cheese or aperitif or mouth-blistering moonshine that captures the essence of each locale. While the reader can visit these places after reading the book, there's a haunting sense that his trip will never quite cut it, that the author was the last person to see it before the inevitable Starbucks franchise nabs the last empty storefront in the local piazza.

So it's understandable that a reader may view David Yeadon's "Seasons in Basilicata" ($25.95, HarperCollins) with a sense of dread. After all, the book fits the pattern: A writer spends a year somewhere getting to know the locals and then writes about it.

Such travel books are loaded with stock characters, and this one is no different. There's sprightly Don Pierino, the local priest, and Vito Montemurro, the farmer and winemaker. But Yeadon rises above the cliche to write a delightful book about an obscure part of Italy with none of the cachet of Tuscany, or even Umbria for that matter.

Basilicata sits in the instep of Italy's boot, a poor region of southern Italy barely mentioned by Fodor's or Rick Steves or Lonely Planet. Its people are poor, and so is the land. Few gourmands wax eloquent about the quality of the region's prosciutto; it rarely leaves the small towns in which it's made.

While virtually every part of Italy seems to have been discovered by now, not so for Basilicata -- at least not before the publication of this book. Yeadon arrived there after being fascinated by a 1947 book, "Christ Stopped at Eboli," which was written by Italian dissident Carlo Levi after dictator Benito Mussolini had him placed under house arrest in the Basilicatan town of Aliano for seven months during the 1930s.

Levi's book was filled with trenchant commentary about fascist Italy and the backwardness of the southern Mezzogiorno region, while Yeadon's attempts to explore what life was like almost 70 years ago fail to get much traction. Instead, he appears far more content to soak up life in this Italian backwater.

That feeling is infectious. No one will associate Basilicata with the rich cultural life of Rome or Florence. But Yeadon, who also illustrated the book with dozens of fine sketches, finds comfort in the rugged landscape and its people, such as Don Pierino. "Little did I know when I met him just how much this man would become involved in my life and experiences there," he writes.

And he also knows how to find a good time. His friend Giuliano shows him how to make olive oil and wine, and they sample richly from both. Many passages begin or end with him about ready to overindulge or dealing with the effects of having done so.

"Our conversation had been a little slow over the last half hour or so, partly due to the pasta and wine lunch (far too much of Vito's strong red wine) and partly because it was really time for a little afternoon siesta," Yeadon writes.

Thematically, much of this ground has been covered by other travel books, but not this part of Italy and not in such a warm and knowing way.