Remember being aghast to find your pet goldfish mysteriously floating upside down in a fishbowl? Or cringing at the sight of your cat mashed along the roadside?

"I started thinking about my dead pets," said Black, who has lived in Lawrence since 1997 after spending most of her childhood on a farm in Idaho Falls, Idaho. "I had a lot of pets die in weird ways, as most kids did. It's traumatizing."

A couple of Black's most vivid pet stories involved goldfish. One of the fish ate its bowl mate. On another occasion, while cleaning, Black noticed a goldfish had abandoned its fishbowl. She later found the fish on a heating vent below the bowl.

"It must have jumped out of the bowl and committed suicide," Black quipped. "That fish was really crisp." 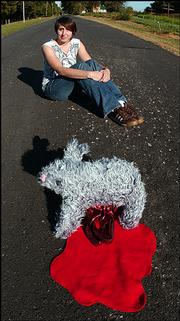 Lawrence artist Julie Black has created a collection of "dead animals" that will be on display through October at the Olive Gallery, 15 E. Eighth St. Black said the inspiration for "Dead Pets for Sale" came from childhood memories of her pets' demises.

For the installation, Black created the "dead pets" -- parakeets, dogs, cats, rabbits and goldfish -- out of felt and sequins. She used a familiar material to form the animals' exposed innards.

"I try to work with material accessible to kids," she said. "All the guts are filled with what would be inside Beanie Babies."

Combining a childlike stuffed animal with the gore of intestines bursting out appealed to the artist.

"I started out on these ideas making stuffed toys and other animals that were cute, but at the same time grotesque," she said. "I really like that juxtaposition."

Jill Kleinhans, an artist and co-owner of Olive Gallery and Art Supply, likes it as well.

"It's kind of black humor and quite humorous," said Kleinhans, who had an installation art class with Black at Kansas University.

Black, 25 and a member of Free State High School's first graduating class in 1998, has been fascinated by guts for a long time. She used to take pictures of roadkill.

A couple of years ago, she started combining the idea of guts with fabrics and sewing. She said most of her recent work had been soft-sculptural forms.

"I stumbled into it in an installation class," said Black, a recent KU graduate and Sun Graphics employee. "I decided I wanted to make a whole environment out of stuffed pieces. Felt was the cheapest and the easiest."

Black prefers to work from her home, where she does most of her sewing on her couch.

"I had a studio at school once at KU, but I never liked to use it," she said. "There were too many people around. I kind of like my privacy."

According to Black's artist statement, "Dead Pets for Sale" was the embodiment of her upbringing -- she said she grew up in a violent atmosphere -- and a viable truth she learned that can pertain to all subjects: that the grotesque can be beautiful and vice versa.

The show probably won't appeal to everyone, Kleinhans said.

"I don't think everybody is going to love it, but I think that's what is great about it," Kleinhans said. "It's kind of nostalgic with a sick little humor and twist."