The Sims 2 is an addictive virtual ant farm filled with creatures that are just as fun to kill as keep alive.

By by Paul Mattson - special to lawrence.com 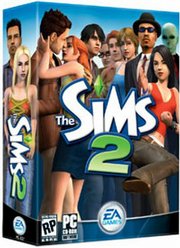 Initially, I didn't care very much when the second installment of the Sims was released. I never played neither the first game, nor any of its numerous expansions and had no inclination to put down Halo and pick it up. I was a first person shooter fan, after all. What interest could I have in the Sims?

The trouble with reviewing a game like this is that there is so much to do and no real objective but to watch your Sims exist. The game is unbelievably deep, and offers you a plethora of options even for the smallest of choices you make.

Sitting down and playing a Sims game for the first time is quite overwhelming. I didn't know what to do first, whether to play the tutorial explaining how not to kill my sims or to start a new game and kill them anyway. Being a first-timer, I decided to sit through the tutorials. The overarching message I got was, "Sims are really dumb," and, "Building houses is unnecessarily complicated," and, "Killing sims looks like it will be really fun." I then created my first victim. Er: I mean sim.

His name was Pedro, and he was a happy-go-lucky sim who wants everyone to love him. Of course, I assigned this to him using the brilliant aspirations system that Maxis built into the game. It only offers you a handful of aspirations: "get rich," "have a family," "pursue romance," "pursue knowledge," and my personal favorite, "become incredibly popular." I was a little disappointed at the selection, as there was no, "embrace your inner darkness," or, "seek the destruction of all life," options. Sad, I know. Fortunately, the aspirations system is only one of many options you have in molding your sim into what you want.

When I think about how much control the player has over their appearance, I almost feel sorry for the sims. You can give them mullets, make them incredibly shy, force them to be anal-retentive, dress them in Matrix outfits, or download any of the hundreds of user-made outfits already available online. With the help of the easily accessible and already robust mod community, your sim can look and behave exactly the way you want them to. Take Linda, for example. Linda was the sim who had the misfortune of being the victim of my sense of humor, a voracious beast that I don't feed very often. When I was through "tweaking" her face, Linda looked like she had not only fallen out of the ugly tree, but had landed face-first and then received a severe beating by a gang of evil gremlins armed with spiked ugly sticks.

Once you've made your sims, you can group them into families or let them embark upon a house hunt alone. If you don't find a house that suits your fancy in the pre-made neighborhoods included with the game, you can download a user made house online or make your own. I chose to do the latter, and was quite pleased with the results, save for one little snag.

This snag came when I tried to build a house. I had major issues with rotating the camera and rotating objects due to intermittent frame rate drops that happened for reasons beyond the substance of reality's fabric. I say this because I am running an AMD-64 processor with 1GB RAM and a Radeon X800 pro. I can run Unreal Tournament 2004, the most processor-heavy game I know of, with 32 bots in onslaught mode and still get awesome frame rates. So, why on earth does this little "Only 800 MHz required" game slow down on my computer more?

Anyhow, the actual process of building was extremely fun. My roommate and I (for he had joined me at this time, mostly to find out why I was laughing so hard) decided to make one home into a sim roach motel. It was a four level, cube shaped tower of doom inhabited by my favorite Sim, Drokmar the Indomitable. The first two floors are normal enough, filled with all the typical party-type regalia (hot tub in the middle of the living room, wide screen TV, random Tiki masks hanging on the wall, pinball machines). But the third and fourth floors are a different story. The third floor is a pointless maze designed specifically to boggle the feeble AI as they make the hike to the dark and dreary fourth floor, where the only toilet in the entire house is kept behind an evil-looking red door and guarded by the dread visage of Drokmar's evil master: a neon-pink flamingo.

Whenever a guest pops into our home, I wait patiently for him or her to meander into the bathroom. Once seated upon the toilet high up on the fourth floor, I switch to buy mode and deleted the door into the room. Then, I just sit back and watched. The other Sims will continue to mill about the house, paying no attention to the screams and wails of the doomed sim. They only pause to weep when the victim actually dies and is hauled off by the Grim Reaper. Many sims met their ends in this way, and soon the dead Sims ghosts haunted Drokmar's Cube-Fortress, much to the delight of the dark-hearted pink flamingo.

The AI used in the game is pretty simple, but is capable of tricking you just enough to make the sims interactions believable. On top of the basic AI, the sims have "memories" that also influence their actions. If you expose a sim to a traumatic experience, say, the death of his entire family right before his eyes (the result of a strategic door deletion), the sim will have trouble concentrating, eating, sleeping, and carrying on his life for a while after the event occurs. Why? Because he won't be able to get it out of his memory! One sim that I did this to cried uncontrollably and eventually died because he was unable to focus long enough to eat!

It is truly fascinating to watch them interact with each other as they bumble about their short, pointless electronic lives. Two sims that I am particularly proud of are Janice and Drokmar the Indomitable, who I mentioned above. I created them both, and orchestrated their romance. They married, moved into Drokmar's cube of dismal sim-death, and spawned a young girl named Brunella, who, thanks to the "genetics system", looked like a freakish combination of her two parents. When she comes of age, I will give her a Viking hat just like her father, and put her to work in the criminal profession. She will make daddy's master proud by bringing fresh souls into the house. Soon, enough souls will be collected, and the Flamingo will: oh, wait: this is still a game review. Whoops.

One thing I do have a complaint about is that there is not an option to own a pet. I really wanted to by a big slobbery monster, name it Thumpy, and put it in the basement. To keep Thumpy well fed, I would install trap doors in various places on the first floor and drop sims that I hated into the dark depths below. Sadly, no such option exists right now, but I would not be surprised if it was included in an expansion pack at some point.

Overall, the graphics and sound aren't really all that much to write home about. The sound comes through crisp and clean in 5.1-surround sound, and the graphics aren't as visually stunning as DOOM 3, but they look fantastic, especially for a game like this.

I really enjoyed Sims 2. If you enjoyed the first title, this is a must-buy. But if you're like me, a first-person shooter fan that's not really convinced that this game is up my alley, let me remind you that you can kill them if you don't like them. Oh, yeah, and keeping them alive is fun, too. The Sims 2 is an addictive virtual ant farm filled with creatures that are just as fun to kill as keep alive.