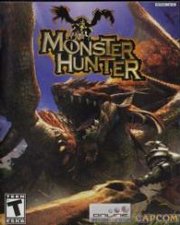 The game stores are starting to fill up with the third-person slasher genre. X-men, Demon Stone (from Forgotten Realms) and Capcom's Monster Hunter all have their own spin on these action quests with RPG elements. Unfortunately for Monster Hunter, it doesn't have the name branding of X-Men or the underground following of Forgotten Realms. So what can it offer the gamer to make it stand out?

Monster Hunter truly offers something unique. Unfortunately it's so unique that it may shut off a huge audience. Initially, MH comes off as a pretty standard hack-'n-slash title with a nice set of weapons and items you can augment as you gain experience. You start off slow, with not many exciting missions to begin your quest. As you complete some basic missions, you earn clothes, items and better weapons to better equip you for bigger and better quests. The only problem is that the seemingly huge world can't be explored. It seems like a Zelda title but everything is entirely too linear.

It is then when you try the online mode. You can team up with three others online to go at your quests together. Although it still remains the same linear fashion, it is in this cooperative effort that Monster Hunter shines in all its glory. The huge monsters among the short quests seem finely tuned for four players. Teamwork online is the only thing that makes Monster Hunter have a lasting enjoyable quality. Each of the four characters can use different abilities to balance out the attack. People using ranged attacks from afar and others with more agility could dance around the monster making melee attacks.

Playing by yourself is okay for awhile, but the minute it becomes a little boring is the same time the quests get obnoxiously hard for only one person to pull off. It is in this design that makes me wonder why they even included a single player mode since this is obviously made for multiplayer cooperation.

Playing online is incredibly fun, although since voice chat isn't enabled, you can only communicate via chat with a USB keyboard, which is pretty odd. The problem here is that it's imperative that you communicate to coordinate your attacks, especially in the later missions.

I love the medieval settings and various towns you traverse. Even though the monsters aren't too original, the amount of them you come across are plentiful and fun to fight. Couple that with a solid framerate and some nice monster growls and roars and you have a pretty engrossing aesthetic presentation.

Monster Hunter is fun in the avenue it's created for. Unfortunately that specific of an appeal limits how robust the entire game could've been. Although there aren't many games like it, it still doesn't do too much to warrant a totally original idea.