A solid basketball game augmented by an addicting slam-dunk mode. 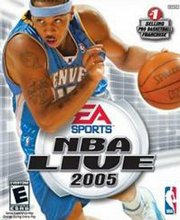 NBA Live 2005 was released earlier than expected. Why? Because although Madden sold better than the $20 ESPN NFL 2K5, ESPN's new pricing structure proved to be a success and made a bunch of new believers in its NFL product. It also had a big jump start on Madden. So with NBA Live, EA decided to get a jump on ESPN's product and bring its price down to a better $39.99.

Not sure if the jump will work on it's own, but EA does deliver a solid game of basketball this year, even though the gameplay remains largely the same. But at least it's ten bucks cheaper.

One of the minor changes in the main gameplay include being able to change your shot on the fly. If you don't like the short J you are going up with and it looks like it may be blocked, you can change your shot with a touch of a button to commit what EA deems "Freestyle Air." It's a nice tough to the smooth control Live offers. Also, the difference between finesse players and clunky players using Freestyle has been tuned even more. So if you have Shaq trying a crossover, he'll more than likely lose the ball and look like an idiot.

What is particularly annoying is that EA's b-ball game still does not allow for a realistic passing game. If your teammate cuts to the basket, you can't lead him. He'll actually stop mid-cut to catch the one-trajectory pass. It's perplexing that so much attention was given to mid-air control with Freestyle Air and the passing remains archaic.

The centerpiece of new features has to be the All-Star Break mode which boasts and overhauled slam dunk competition that gives you immeasurable control over spectacular dunks. Using two different timings of one of four different choices of buttons, you can choose your take-off, dunk style and how much you tweak its power. Depending on where you jump from, you will have a different animation for each timing. The possibilities are seemingly endless, especially since you can even throw the ball off of objects like the backboard or shot clock. The slam dunk mode is highly addicting and is the best of its kind.

Dynasty mode has a new PDA system that shows your team's information and keeps you current with the major happenings around the NBA and locally. The salary cap also must be adhered to as you cajole in the trading system. All of the normal managing amenities are here although player's salaries aren't as accessible as they should be while looking at your cap information. Still, there is a lot to do that will keep the NBA hardcore pleased, even though it has no real answer to ESPN's weekly training and chemistry settings for the team.

Playing online is a mixed bag on the Xbox and PS2. The framerate seems to suffer quite a bit and lag seems to hamper every other game we played online. Once you find a solid connection, the game seems to play just as normal, but it's a crap shoot. Gamecube owners are just out of luck in the online arena...as usual.

The graphics are much, much better than previous EA efforts and the player faces, although not as good as ESPN's title, are also a marked improvement. One thing that EA does do better than ESPN's basketball title though is animation. Everything seems fluid and transitions between animations seem realistic. The All-Star Weekend mode looks much better than actual games. Since the hardware has much less to render, EA decided to really vamp up these sessions despite the lack of continuity. The commentary by Marv Albert and Mike Fratello has significantly more variety than ESPN's offering and provides a good backdrop for gameplay.

Despite the spotty online experience and ridiculously archaic passing, NBA Live is a solid game of basketball that will surely please fans of the franchise. The slam dunk mode alone justifies a good look.

How can you possibly rate this game even in the same alphabet with ESPN, I wonder if you were looking at the same game at all? Maybe you were not, that's the only thing that I can say in relation to both games receiving the same score for grading...