Voices in the Dark

Local watering holes are opening their doors to poetry. But who's listening? 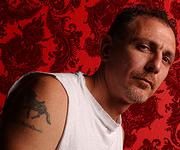 Lawrence poet and fomenter of "Unholy Day" Poetry Night, which starts this Sunday night at the Jackpot Saloon.

As any poet knows, the best reward for a good performance is silence.

The kind of silence where you can hear paper crinkling ... the toilet flushing ... the door guy asking incoming patrons for IDs.

Most of all, the kind of silence where you can hear what the FREAKING POET IS SAYING.

When Ed Tato stalks the stage, this in the kind of silence he's looking for. And as a veteran of the local poetry "scene" (a phrase that would send most local poets into convulsive fits of laughter), Ed Tato usually gets it.

Tonight, as Tato performs at the Jazzhaus, the silence is particularly meaningful - there's actually a crowd to shut up. It's a far cry from last month's poetry night, which attracted a sum total of two readers and one listener ... and was held on the roof (to sidestep the smoking ban).

Not that Tato gives two flips if anyone shows up. He's been around long enough to keep his expectations low.

"Nobody goes to poetry readings, man," says the beer-loosened Tato before taking the stage at the Jazzhaus. "It's poetry - who the f*ck cares?"

Hitting the Jackpot
For all his pessimism, Tato is sincere in his desire to reach people with his poetry. When he's not selling real estate (he also recently stepped down as president of the East Lawrence Neighborhood Assn.), Tato is an avid writer with a published book of poetry ("True Stories from la Cosa Nostra") and a reputation for delivering engaging, passionate readings.

Beginning Oct. 10, Tato will host the "Unholy Day" Poetry Night at the Jackpot Saloon. On the second Sunday of every month, an open mic will follow readings by poets from the extended family of Kansas City-based publisher Unholy Day Press.

One poet who may not necessarily take the stage, however, is Tato.

"I'm a megalomaniac so I want to make this not be about me," he said.

The inaugural event will feature Lawrence poets Sarah Ruhlen and Christopher Sitro, and future installments of the series will likely bring KC-based poets like Jason Ryberg and Will Leathem.

Tato said he hoped the featured speakers would bring an element of professional-grade entertainment to the night, as well as inspire people who wouldn't ordinarily be interested in poetry to come and listen.

"If you play music and you play it well, people will be entertained," he said. "You can't say that about poetry."

By design, poets who wish to sign up for the open mic will have to show up before the featured speaker to get on the list.

According to Ruhlen, who performed a number of times at the now-defunct "Medusa" readings at Aimee's Coffehouse, that should help deter poets who are more interested in hearing their own voice than listening to their peers.

"You get a lot of, 'I'm going to read and then I'm going to go out and celebrate my reading,'" she said. "I just kind of take it in stride. I figure that's part of growing up as a poet - learning that there are other people out there and it's probably a good idea to listen to them."

(Note: The Jazzhaus stage is dark and backlit, making the video images difficult to see. Audio only versions are provided for low-bandwidth connections.)

Slammed
The Unholy Day series hopes to have the kind of staying power that the Jazzhaus's open mic poetry night has exhibited for the last three years. A fixture on the first Wednesday of every month, the series has emerged as the most consistent in town.

Lawrence writer and comic Steve Fonseca started the Jazzhaus open mic in hopes of creating something akin to the rowdy, participation-based readings he experienced during a stint living in Portland, OR. He wore the night's intimidating reputation as a badge of honor, asking audiences to go lightly on "virgins" but making it open season on regulars.

"I kind of liked the fact that you could get up there and read something that meant a lot to you and then find out nobody gave a shit," Fonseca said. "(The bar atmosphere) forces you to not just be a poet and a writer but also to be an entertainer."

Fonseca learned quickly that he'd have to adapt to his target audience, which meant bringing in a band to fill in the gaps (and sometimes jam behind readers) and allowing freestyle rappers to come and do their thing. During last month's open mic, local rapper Left E. Grove delivered an impromptu 15-minute freestyle about the Women of KU that featured the memorable off-the-dome lyric "I got more rhymes than China's got vaginas."

Now married and trying to focus on his stand-up comedy, Fonseca handed the reins to friends Megan McHenry and Jen Stone last month. Though the time commitment was the overwhelming factor in his decision, he admitted organizing the night took a mental toll as well.

"It can be very stressful when you're sitting there going, 'I'm the only writer here and I've got a full house - what the hell am I going to do?'" he said. 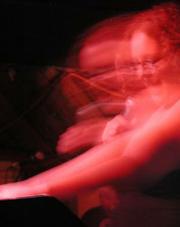 Now that McHenry is in charge of emceeing the night, she may be facing a challenge even more daunting than her first time getting onstage - living up to Fonseca's reputation for bluntness.

"I feel like I have to put my foot down in some ways, and it's not just if they're talking about some Jesus-lovin' stuff ... what if a reading sucks?" she said. "I haven't figured out what to do with that yet to be quite honest because I'm a pretty motherly kind of person."

Between the lines
While the Jazzhaus readings have demonstrated the appeal of a slam-type atmosphere, the annual Poetry Series at the Lawrence Arts Center has shown that there is still an audience out there willing to sit attentively and listen to organized readings.

Organizer Jason Wesco, who publishes local poets through his Perry-based company 219 Press, said he wasn't a big fan of the slam format.

"I didn't really feel like it helped me a whole lot as a writer," said Wesco, who has a pocket book of poetry available through Unholy Day Press in addition to his book "Between the Letters" (219 Press). "Drunk people can be a strong deterrent." 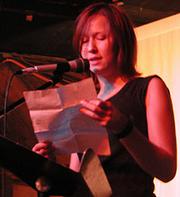 Years of organizing one-off readings with disappointing turnouts have inspired Wesco to focus all of his energies on the LAC event, which takes place in April.

Though he's cautiously optimistic about the potential for open mics to survive in Lawrence, Wesco says the key to attracting audiences is convincing them to put forth the effort to listen.

"You leave a lot to the reader, so there's a lot of work that goes on," he said. "With poetry, it's as much about what you leave out as what you don't."