Billy Q. Effinger has never been to Lawrence. But this "fantastic vocal stylist" has left an enduring stamp on our hearts with his unsolicited CD mailer

(Editor's note: Before reading this story, it is strongly encouraged that you give Billy Q. Effinger's "Willie the Warlock" a listen. The mp3 is available free on lawrence.com. We apologize in advance for the endless waking hours you will spend humming this infectious tune. Though our love and adulation for all things local has kept us, hitherto, from straying outside the bounds of local bands, the time to pay homage otherwise has come...

Sometimes, you have to break the rules. Bob Dylan, Pablo Picasso, Mahatma Gandhi - they knew this.

Now you can add Billy Q. Effinger to that elite list. A little explanation is in order, perhaps.

Billy Q. entered into our lives casually in the virgin days of September. He arrived in a nondescript manila CD mailer, accompanied by a letter from the Duluth Musician's Association (AFL-CIO) informing us that Billy has proven himself to be "a fantastic vocal stylist." According to the letter, the enclosed CD would offer us two songs that were "infectious ... yet wear well upon repeated listening."

You can say that again.

Three weeks later, "Willie the Warlock" is nearing its 100th spin in the lawrence.com dungeon. We've gotten better at suppressing the subconscious urge to belt out "I am immortal!" but it's going to take a lot of willowing the proverbial wisp to get this song out of our heads. 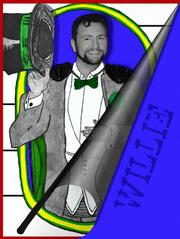 To ascertain the magic behind the music, we placed a call to Billy at his home in Twig, Minn., (near Duluth and the western tip of Lake Superior). Ever the gentleman, we found Mr. Effinger's predilection for discourse to be nearly as impeccable as his fluid vocal stylings.

As it turns out, Billy Quincy Effinger is a happily married 42-year-old father of five who owns and operates a karaoke business with his wife Coleen ("Beanie" to her friends). The duo is a mainstay on the Twig lounge circuit, performing weekly at Le Grand Supper Club and the Bourbon Street Cafe.

"She's actually the original Beanie Baby," says Billy, who wooed Coleen by singing Barry Manilow's "Could It Be Magic?" at a high school Halloween carnival. "In the paper when we got married it said 'Hussey marries Effinger' ... it looked kind of nasty."

Billy's music career began in at the age of four when he skirted door-to-door in his hometown of Proctor, Minn., singing to little old ladies in exchange for candy. In high school, his choir teacher encouraged him to develop his four-octave range - a trademark he carries with him to this day.

"I didn't think anything of it until I saw Regis and Kathie Lee one day and she was talking about some artist that wrote this music in three and four octaves and people just can't sing that way," Effinger says. "I thought, well, she's wrong there - I know I can."

After graduating high school, Effinger sang in a cover band that favored popular artists of the time - Styx, Billy Joel, Barry Manilow and Elton John to name a few. Since then, he has sung door-to-door music telegrams, performed in a number of local parades and composed jingles for local news programs.

Though Effinger's favorite acts include the aforementioned ones as well as Elvis Presley and Little Richard, he tries to keep up with modern music to keep his karaoke business up to speed.

"Now I like the Weezer," he says. "I think music is music. It depends on your mood ... If you're driving down the road, you've got five kids in the car and you've got something hammering, well, that can get you pretty edgy real quick."

Orchestral maneuvers in the dark

Since he doesn't play any instruments (at least not with more than one finger), Effinger composes his original tunes by chopping up karaoke backing tracks that he purchases from a company in North Carolina. It's all "above-the-table and paid for" he asserts, though it can be difficult to explain to people not familiar with the technique.

"I don't think I'm the first - you hear about sampling all the time," says Effinger, who jokingly refers to his "band" as the "American Imperial MT Orchestra."

"I don't sing rap music ... though my music can kind of sound like rap music 'cause of the way the accompaniment can kind of circle."

Though he initially pegged "Blue Boy Billy" as his first single, "Willie the Warlock" has proved to be the track that has attracted the most attention. Inspired by Harry Potter and Lord of the Rings, the song tells the tale of a warlock who refuses to use his magic powers to woo a lady. Instead, he relies solely on his personality ("I won't willow the wisp to make you my girl").

"Everyone seems to be into magic so I told the kids I was going to write a song about a warlock," he says. "Plus, my voice spans over four octaves, and you don't find a lot of songs that do that."

Elsewhere on the six-song album, somber lyrical undertones hide beneath deceptively upbeat pop songs. "Veronica's Blue" uses the Statue of Liberty as a metaphor for the country's sadness following the 9/11 terrorist attacks, and "Blue Boy Billy" chronicles Judy Garland's bouts with depression ("She put so much emotion into music / As if she lived each song and it was real").

"She died in an extreme drug era where a lot of those people were dying from drugs," Effinger says. "Now she's flying up with the bluebirds, high up in the sky over the rainbow."

On the lighter side of things, "Blind Date (Screwy Kazooy)" is a whimsical number about a man who is unwittingly set up with an escort. The moment of catharsis comes when he asks for a kiss ... and she asks for more money.

"It just kind of came out that way," Effinger says. "It wasn't something that happened to me personally, anyways."

Effinger hopes to use the six-song disc as a springboard to a lasting career in music. To that end, he's already sent out more than 700 copies to radio and press.

While he doesn't expect to quit his karaoke business anytime soon, his wife's second income has allowed him to focus most of his efforts on his true passion - writing music.

"I think we get stuck on trying to make a dollar, but hey, sometimes that doesn't pan out," he says. "The best thing to do is try to get people to hear your art any way you can ... I'm just a creative fellow trying to show somebody what I created."

Hi Billy, Your album is so easy to listen to and has that "Sing-a-long with Billy" feel to it.

It's like going back in time, when this kind of music was played by local radio stations, and you thoroughly enjoyed listening and singing to it.

If your next album is like this one, you will soon gather a very big interest from fans, not only in the US, but from around the world.

In the words of Richard Gintowt (above), your style of music on this album is "infectious".

I thank you for allowing us the pleasure of promoting your music to the entire world, through our radio staion "RelaxRadio" in Perth, Australia.

We wish you all the best for the future,and look forward to more of your work.

Dear Billy, It's Bobby B. and his favorite sister in law, Louies girl Patti. We just found you here and we're going to download some tunes. We love to listen to you and wish you and Colleen all the success in the world. Keep up the good work!!!!! Bob and Patti

so is this album for sale? and wheres the other song....can we download it?

Wow, what amazing journalism by Lawrence.com . You actually called Billy Q.? That's great, I'm glad you found out more about him. I was (honestly) wondering.