Los Angeles — Rodney Dangerfield, the bug-eyed comic whose self-deprecating one-liners brought him stardom in clubs, television and movies and made his lament "I don't get no respect" a catchphrase, died Tuesday. He was 82. 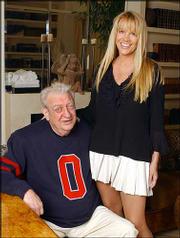 Comedian Rodney Dangerfield poses with his wife, Joan, at their home in Los Angeles in this July 28 photo. Dangerfield, who slipped into a coma after heart surgery in late August, died Tuesday in Los Angeles. He was 82.

Dangerfield, who fell into a coma after undergoing heart surgery, died at 1:20 p.m., said publicist Kevin Sasaki. Dangerfield had a heart valve replaced Aug. 25 at the University of California, Los Angeles, Medical Center.

Sasaki said in a statement that Dangerfield suffered a small stroke after the operation and developed infectious and abdominal complications. But in the past week he had emerged from the coma, the publicist said.

"When Rodney emerged, he kissed me, squeezed my hand and smiled for his doctors," Dangerfield's wife, Joan, said in the statement. The comic also is survived by two children from a previous marriage.

As a comic, Dangerfield -- clad in a black suit, red tie and white shirt with collar that seemed too tight -- convulsed audiences with lines such as: "When I was born, I was so ugly that the doctor slapped my mother"; "When I started in show business, I played one club that was so far out my act was reviewed in Field and Stream"; and "Every time I get in an elevator, the operator says the same thing to me: 'Basement?"'

In a 1986 interview, he explained the origin of his "respect" trademark:

"I had this joke: 'I played hide and seek; they wouldn't even look for me.' To make it work better, you look for something to put in front of it: I was so poor, I was so dumb, so this, so that. I thought, 'Now what fits that joke?' Well, 'No one liked me' was all right. But then I thought, a more profound thing would be, 'I get no respect."'

He tried it at a New York club, and the joke drew a bigger response than ever. He kept the phrase in the act, and it seemed to establish a bond with his audience. After hearing him perform years later, Jack Benny remarked: "Me, I get laughs because I'm cheap and 39. Your image goes into the soul of everyone."

Flowers were placed on his star on Hollywood Boulevard after word of his death, and the marquee of The Improv, a comedy club where Dangerfield often performed, read "Rest In Peace Rodney."

"Rodney was always hilarious and brilliant," Joan Rivers said recently. "He's had one good life. He's one of the great comedy minds. He spans so much time. The longevity -- it's a testament to how funny he is."

Teller, half of the magic duo "Penn & Teller," said Dangerfield hardly needed material since he was "intrinsically funny." He said Dangerfield at times would appear while they were performing in Las Vegas, walking around the casino wearing a satin dressing gown and sandals with a beautiful girl on his arm.

"He was so confident," Teller said. "He was Rodney, and he could do anything."

Comedian Adam Sandler, who starred with Dangerfield in 2000's "Little Nicky," said the affection felt for Dangerfield "when you saw him on TV or in the movies was doubled when you had the pleasure to meet him. He was a hero who lived up to the hype."

"When you saw Rodney on 'The Tonight Show' sitting on the couch with Johnny Carson, you didn't want it to go to commercial," comic Bernie Mac said in a statement. "He always left you wanting more, and I'm going to miss him."

Dangerfield had a strange career in show business. Born, Jacob Cohen on Nov, 22, 1921, on New York's Long Island, he took the name Jack Roy at age 19 when he started as a standup comedian. He made only a fair living, traveling a great deal and appearing in rundown joints.

Married at 27, he decided he couldn't support a family on his meager earnings, and took work selling paint and siding.

He returned to comedy at 42 and began to attract notice with the moniker Rodney Dangerfield. He appeared on the Ed Sullivan show seven times and on "The Tonight Show" with Johnny Carson more than 70 times.

After his first major film role in "Caddyshack," he began starring in his own movies.

In 1995, the Academy of Motion Picture Arts and Sciences rejected Dangerfield's application for membership. A letter from Roddy McDowall of the actors branch explained that the comedian had failed to execute "enough of the kinds of roles that allow a performer to demonstrate the mastery of his craft."

The ultimate rejection, and Dangerfield played it to the hilt. He had established his own Web site ("I went out and bought an Apple Computer; it had a worm in it"), and his fans used it to express their indignation.

The public reaction prompted the academy to reverse itself and offer membership. Dangerfield declined.

"They don't even apologize or nothing," he said. "They give no respect at all -- pardon the pun -- to comedy."