Dylan's lyrics legendary, but are they Nobel-worthy?

Stockholm, Sweden — How many roads must a man walk down, before you call him a ... Nobel Prize-winning songwriter?

It's a question being asked increasingly in literary circles, as the annual debate over who should win the Nobel Prize in Literature tosses out a familiar, but surprising candidate: Bob Dylan. 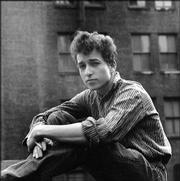 An early but undated publicity photo shows Bob Dylan in New York City. The image appears in his autobiography, "Chronicles Volume One."

While many music critics agree that Dylan -- or Robert Zimmerman, as his parents named him -- is the most profound songwriter in the history of modern music, his repeated nomination for the Nobel Prize has raised a vexing question among literary authorities: Should song lyrics qualify for literature's most prestigious award?

Christopher Ricks, co-director of the Editorial Institute at Boston University -- and an avid Dylan fan who has written scholarly papers on the songwriter's work -- said the question was "tricky."

"I don't think there's anybody that uses words better than he does," said Ricks, the author of highly regarded works of literary criticism such as "The Force of Poetry" and "Allusion to the Poets," as well as books on T.S. Eliot, Lord Alfred Tennyson and John Keats. "But I think his is an art of a mixed medium. I think the question would not be whether he deserves (the Nobel Prize) as an honor to his art. The question would be whether his art can be described as literature."

It definitely can, said Gordon Ball, an author and literature professor at the Virginia Military Institute in Lexington, Virginia -- who has nominated Dylan every year since 1996.

"Poetry and music are linked," Ball said. "And Dylan has helped strengthen that relationship, like the troubadours of old.

The Nobel Prize in literature is given out annually as the highest accolade by the 18 lifetime members of the 218-year-old Swedish Academy. Candidates can be nominated by members of other literary academies and institutions, literature professors and Nobel laureates.

Each year, the Swedish Academy receives about 350 nominations for about 200 different candidates, which is narrowed down to about five finalists. The winner is announced in October after a selection process clouded in secrecy. The finalists, save for the winner, are not revealed for 50 years.

Ball said he first nominated Dylan for the prize after his friend and fellow writer Allen Ginsberg urged him to do so. Ginsberg, a Beat poet whose literary circle included Jack Kerouac and Neal Cassady, nominated Dylan in 1996.

"Dylan is a major American bard and minstrel of the 20th century" who deserves the award for his "mighty and universal powers," Ginsberg wrote in his nomination letter, a copy of which was read to the AP by Ball.