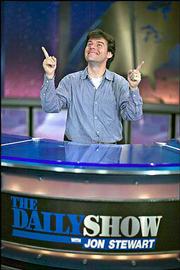 Earl Richardson/Special to the Journal-World

Stewart Bailey, co-executive producer of "The Daily Show," is pictured on the set of the Comedy Central series. Bailey, a 1989 KU graduate, is a Topeka native.

During last year's Emmy Awards ceremony, Stewart Bailey learned an important lesson when he rushed onstage to collect a statuette after "The Daily Show With Jon Stewart" won in the variety/comedy series category.

"I have got to get a better pair of tuxedo pants," says Bailey, a 1989 Kansas University grad and Topeka native.

"The cummerbund doesn't really hold anything; it's kind of like a sash. Last year I was walking up on the stage and trying to pull up my pants so they wouldn't fall. I was thinking, 'Millions of people are watching. This would be a very inopportune time to reveal what kind of boxers I have on.'"

Flash forward to the 2004 Emmys in September. This time "The Daily Show" bested such stalwart icons as "David Letterman," "Conan O'Brien" and "Saturday Night Live" in the same comedy category, while picking up a second award for writing.

And Bailey, a co-executive producer of the irreverent Comedy Central series, still suffered a wardrobe malfunction.

It's certainly not the first time that a "Daily Show" staffer has escaped trouble by the seat of his pants.

Since debuting in 1996, the half-hour news parody has pushed the envelope with its abrasive, hilarious spin on topical material.

"We kind of hope that at the end of the day we've rubbed everybody a little bit the wrong way, so that it changes your thinking or makes you look at something a slightly different way," says Bailey from the show's offices in New York.

"There's no agenda to piss anybody off. But we inevitably do."

Political party
"The Daily Show" truly began to build its reputation during the previous presidential election, which the show dubbed "Indecision 2000." Now that the George Bush v. John Kerry onslaught is the dominant topic of conversation, Indecision 2004 has become a nightly must-see for a good chunk of the public -- many of whom watch it at 10 p.m. INSTEAD of the network news shows it lampoons.

"More than anything, we're kind of a release for people," he explains. "I just got so tense watching that vice-presidential debate (Tuesday) night that I felt like I needed to go for a jog at midnight. It was just so angry and nasty. We try to channel that into some kind of comedy."

The humorous aspect hasn't stopped the show from delving into the actual political arena. Kerry has been an in-house guest, and John Edwards actually announced his presidential candidacy during a "Daily Show" appearance.

Earl Richardson/Special to the Journal-World

"People were offended when O'Reilly called our audience 'stoned slackers,'" Bailey recounts. "But Jon tried to correct it by saying, 'We actually have an audience of very productive slackers -- or stoned go-getters.'"

The sixth degree
A graduate of Topeka High School, Bailey came to KU in 1985 to study journalism. Despite writing and performing in Rock Chalk Revue for a few years, he did little to prepare himself for a career in comedy.

Upon graduation in 1989, Bailey moved to New York and took a job as an NBC page. ("I wore polyester and had a nametag," he divulges.) He parlayed this into a receptionist job at "Saturday Night Live." Eventually, he got hired as a researcher on MTV's "The Jon Stewart Show."

During the program's two-year run, Bailey had the infamous distinction of coining the term "Six Degrees of Kevin Bacon" with regard to the now-popular trivia challenge. It transpired when the creators of the game were guests on the show.

"The play ('Six Degrees of Separation') was on Broadway at the time," he explains. "I asked, 'Who are you guys?' They said, 'We're the Kevin Bacon guys.' I thought, 'Nah, that just doesn't say anything. People will think you're look-alikes or something.'"

In 1996, Bailey landed a job as a field producer on "The Daily Show" under original host Craig Kilborn. It was on this early edition that he became a good friend of sardonic correspondent Stephen Colbert (buoyed by the fact the pair had to share a desk and phone during these earlier, more Spartan days). Three years later he was reunited with Stewart.

"I was always hoping in high school and in college that there must be a job out there that doesn't feel like you do your punch card every day," he says. "This is it."

Jayhawk obsession
As an executive producer, Bailey maintains his duties are broader than a typical counterpart at a network program.

"It's really weird which one of us will go to kusports.com and find out what a recruit did," he says. "We were doing special searches on Malik Hairston (who opted for Oregon over KU) for like two weeks. If you think it's an addiction that wanes over time, it only seems to grow stronger."

Likewise, "The Daily Show" only seems to be growing stronger. While Bailey and company soon will have to wait four more years for another election to offer them comedic mine fields to plow through, there is little doubt the series will continue to give "Letterman," "Leno" and "O'Brien" a run for their money -- especially at the Emmys.

"We're the smallest show in terms of audience in that group," Bailey says. "The difference between us and one of the networks is that if a chair breaks in my office, I know for the next year I'm living with a broken chair. The awards don't equal upgrades."