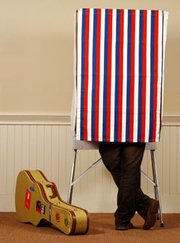 "Hello Lawrence, so glad to see you tonight! Now, I've got a little question for you: Are you ready to rock?!"

"All right then, let me ask you one more little question: ARE YOU READY TO FILL OUT A VOTER REGISTRATION CARD AND FULFILL YOUR CIVIC RESPONSIBILITIES?"

OK, OK, that's a bit of banter that probably won't be taking place on the stages of Lawrence anytime soon.

But politics and music will be mixing in a big way in three separate shows at The Granada Theatre designed to get out the vote among college-aged students of all political persuasions: Republicans, Democrats and independents.

"Especially for our generation, music is one thing everybody has in common," said Katie Wolff, organizer of tonight's "Rock the Vote" show. "Not necessarily genres - but it's an essential part of youth culture. ... It's just a very convenient way of getting out our message."

Three concerts are on the agenda:
¢ Tonight's $5 "Rock the Vote" show featuring Murder By Death, The New Amsterdams, Sleep Station and The Afternoons. Rock the Vote is a nonpartisan organization that registers concertgoers to vote and encourages them to show up at the polling places on Election Day; the show is also sponsored by the Student Legislative Awareness Board at KU. The doors open at 7 p.m.

¢ Thursday's $5 Democratic show, which will feature local Democratic candidates, as well as The Girl is a Ghost, Fourth of July, Drakkar Sauna, Justin Ripley, Darling at Sea, Chemical Ali and Elevator Division. The rally starts at 7 p.m., with music getting underway at 8:15 p.m.

Dual purpose
While the purposes of the concerts are definitely political - voter registration will take place at each event before the Oct. 18 registration deadline, and candidates will be on hand for the Saturday and Thursday shows - organizers are also hoping to have some fun.

"It just seemed like a good opportunity to play," says Wallace Cochran, guitarist and singer for Drakkar Sauna. "It gives everybody something to do on a Thursday."

Cochran adds: "It's just a show. There are seven bands on the bill; it's nice to play with that many bands."

Musicians at the other events are trying not to take themselves too seriously, even though they're promoting a serious cause.

Rock the Vote for Kris Kobach

"Alice Cooper said that anyone who takes advice about politics from a rock star/musician is basically an idiot," Lipriddle's Gigi Bourquin says. "Musicians play late at night, sleep through much of the day, and are rarely found reading a Wall Street Journal.

But, Bourquin said, " for Lipriddle, getting involved with an event like this is a way to encourage people (including ourselves) to educate themselves about the issues and vote."

"I think using entertainers to push voter awareness is one of the best moves anyone could pull," Bottles says in an e-mail. "Who's not going to listen to someone talk about the importance of voting when they love their music or TV shows or whatever? Entertainers are so impactful already and its about time that is used for something relevant." 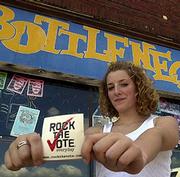 Katie Wolff, Kansas University senior from Shawnee, Rock the Vote street team coordinator poses in front of The Bottleneck. Every Friday night leading up to the Oct. 18 deadline, Rock the Vote will attempt to register people to vote in the November election.

Non-musicians involved in the concerts are counting on that influence.

"We knew live music would draw students to the event. Therefore we can talk to them about voting," says Blake Swenson, who's organizing the Democratic concert with Ripley. "We're really trying to get the student vote out."

"Generally, these things are to promote voter awareness, promote the candidate - get his name out more in Lawrence - and have a good time doing it," McFarland says.

King of Rock?
The competing concerts beg the question: Do Democrats or Republicans rock harder?

¢ McFarland: "I don't know. Depends on what you mean by harder. I'd say it's pretty equal."

¢ Swenson: "I think it's clear - Democrats in my opinion. But I'm probably biased. I don't know; it's my style of music. I'm sure there are Republicans who rock just as hard."

¢ Cochran, supporting the Democratic ticket, calls it a draw: "My (Republican) parents are pretty energetic in their appreciation of music."

¢ Bottles, the trash-talker: "Obviously Republicans, because I don't see any Democrats around here putting on any rock shows and if they are they are doing a terrible job at promoting. Plus George Dub (Bush) is pretty much the sweetest man to ever grace the White House."

¢ Bourquin: " I think that Independents might rock out better because they probably don't have a set of behavioral guidelines they feel they must adhere to."

¢ Wolff, who maintains her nonpartisan stance: "I've partied with both and it's definitely a different type of party for either side."