Los Angeles — President Bush has unwittingly become a muse for a growing number of artists inspired by the war in Iraq and the upcoming presidential election to make political statements through their craft.

Painters, sculptors, graffiti artists, guerrilla poster makers and aspiring artisans have been showing an unprecedented level of political outrage, said Carol Wells, director of the Center for the Study of Political Graphics. 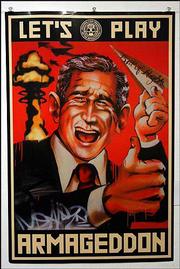 A poster by artist Mere One hangs on a wall during a political art exhibition at Track 16 Gallery in Santa Monica, Calif. The exhibition in this politically liberal beach city drew more than 350 people Friday night who snatched up political posters, stickers and postcards.

Guerrilla poster artist Robbie Conal, who has been plastering Los Angeles and other cities with political posters for 18 years, said a younger generation of artists had been turned on by politics. Political street posters this year have been "popping up four times as much as anytime since I've been doing it in L.A.," the 60-year-old Conal said.

Nothing to date has been created on the scale of Pablo Picasso's 1937 apocalyptic mural "Guernica," considered one of the most powerful anti-war statements in modern art. But the amount of political art being produced recently has been unprecedented, even exceeding the anti-administration views displayed during the Vietnam War, Wells said.

The movement has spread to the Internet, where a recent posting on bulletin boards in Los Angeles, San Francisco, New York City and Portland, Ore., urged artists to participate Oct. 13 in a day of protest by displaying political art in public.

Sculptor Richard Serra also has turned to the Internet. He illustrated a poster titled "Stop Bush" that features a haunting drawing of a hooded prisoner from Iraq's Abu Ghraib prison. Another poster injects Bush's head in the macabre Francisco de Goya painting, "Saturn Devouring His Children."

A visitor passes posters hanging on a wall during a political art exhibition at Track 16 Gallery in Santa Monica, Calif. The exhibition in this politically liberal beach city drew more than 350 people Friday night.

Serra, a minimalist considered one of the world's greatest living sculptors, has placed the images at www.pleasevote.com and encourages their download.

Dozens of politically inspired posters, bumper stickers, decals and postcards were featured recently at an art exhibition at Track 16 Gallery in the politically liberal beach city of Santa Monica, Calif. The more than 350 people who showed up Oct. 1 packed the gallery and snatched up artwork created by Conal and other artists.

Political art, most relying on turns of phrase, lined the walls of the gallery during the "Put Up or Shut Up" exhibition and a long line stretched from a booth where the artwork was given away.

Artists displayed, or handed out, fliers, stickers and posters that read: "Iraq Is Not Vietnam, It's Worse," "Vote No To: Greedom & Demockery," "Fear Is Our Gross National Product" and "Elect A Madman, You Get Madness."

Conal, who was cohost of the political art exhibit, recently joined the Post Gen art collective and collaborated with other underground artists to create anti-Bush posters. He said his poster started with a black-and-white oil painting of Bush with text of "Read My Apocalips." The phrase is a "built-in punning reference" to the broken promise made by President Bush's father not to raise taxes, Conal said.