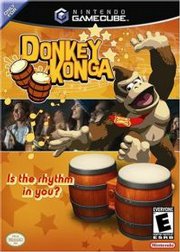 Rhythm games are one of gaming's niches that had a boost in popularity a few years ago with the Dance Dance Revolution, um, revolution. Timing your footsteps on a huge mat controller in conjunction with signal on screen proved to be an invigorating change of pace for many.

Nintendo throws itself into the ring with its latest innovation:bongos. While not promising the exercise that the DDR mat would provide, the bongo controllers concentrate much more on percussion skills, obviously. The first game for the bongo set-up, Donkey Konga, is a pretty good way to enter into this new realm of rhythm gaming.

Once you pick a song and it starts playing in a Donkey Konga mode, signals indicating which bongo to press move from right to left. Once a certain signal passes through the designated marker, you are to press that part of the drum at the same time. The bongo controller is equipped with a microphone in the middle to sense clapping or a loud noise. So you will encounter four main types of signals. Right bongo, left bongo, both bongos or clap. Sometimes a signal will "smear" which indicates that you can go crazy on that bongo, bongos or clap until the smear disappears.

The two bongos themselves are really responsive to the slightest touch. Sometimes, instead of striking the bongos I found myself pressing them like buttons, which isn't as fun, obviously. The mic, however, seems to be responsive, but has a little trouble keeping up with rapid claps. This doesn't cause too many problems with Donkey Konga, since most of the rapid strikes are usually reserved for the bongos. But no matter what, you can adjust the sensitivity of the microphone in the settings menu so that it responds how you want it to.

There are two main modes: Street Performance and Jam. Street performance has you drumming along with the signal guides to any song you select. Songs range from a few licensed tunes like Blink 182's "All the Small Things," Devo's "Whip it" and Queen's "We Will Rock You" (not performed by the original artists) to kids songs to classic Nintendo themes. You earn coins in Street Performance to unlock songs for Jam mode or unlock higher songs for a higher difficulty.

Jam mode is one incredibly long version of Simon. With Simon, the old light-up memory game, you had to memorize a handful of colors then stomp them back in sequence. In Jam mode in Konga, you must memorize the entire rhythm routine in the Street Performance mode. Why on God's green Earth would you spend that amount of time memorizing that much. I guess the hope was that Street Performance is so addicting that we'd eventually play it by memory. While it is addicting, Jam mode is way too demanding for almost any gamer.

Multiplayer is where Konga really shines. Nothing beats bongo-ing against a friend in a race for accuracy. There is even a "POW" block that when hit, reduces your opponent's score. If you can convince your friends to try Konga out, you will all be rewarded with the enriching multiplayer fun.

The graphics serve as placeholder guides for what the game really revolves around: your playing. There is nothing really inspired, but the point isn't for outstanding graphical presentation. The sound is good. The remakes of all the pop tunes are commendable, although the original tracks would have been the better way to go. The amount of songs is pretty lacking, and it won't take that much time to get through them all.

The mini-games are not too fun, but the unlockable songs and sounds for your bongos could keep you playing alone for awhile. Even though many of the rhythm patterns are very basic, even on the hardest difficulty, Donkey Konga is a great start. Although it may not reach the popularity of the DDR franchise, the bongo idea definitely has the same amount of innovation and merit.