Does the best looking GBA game live up to the Mario pedigree? 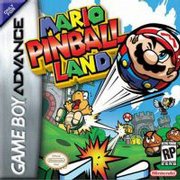 Mario is a bit like Midas. Pretty much anything he touches turns to gold. Mario is the renaissance man of video games. He can jump, golf, search, battle and play tennis. Now he is out to prove that his brand of pinball is just as exciting as his other ventures.

Developer Fuse has no doubt created one of the most visually appealing games in Mario Pinball Land. The amount of rendered environments and complex sprite patterns are amazing for the GBA. And while the graphic capabilities continue to impress, the gameplay itself has some glaring issues in an otherwise fun pinball outing.

There are five worlds and several pinball tables to traverse. By hitting objects several times you can either earn the table's star, coins or other prize or open up another path to a closer table. You encounter several familiar Mario fiends like Goombas and Monty Moles from Super Mario World. You can get super powers like multiball and thunderbolt to help you progress. Eventually you will come to a boss battle where the same sort of rules apply. It's an interesting gameplay decision to go with a pinball them when several pinball elements are missing like a tilt or even fun loop-de-loops or stoppers.

Almost every object on the table has a purpose or is an enemy to dispose of. This would all be okay If it weren't for your objectives resetting every time you leave a table. Even if you accidentally visit the table above you and then come back down, all the progress you just made trying to open or clear an objective has been reset. The game penalizes you for no reason.

The ball physics are fairly typical of a good pinball machine sans tilt, although much of the gameplay doesn't hinge on normal pinball environments. In fact, trying to accomplish most tasks is a difficult task. For instance, trying to get to an upper table when a door finally opens requires you to be perfectly accurate, flipping the ball across the entire table with no help. This is due to the fact that much of each table, save for boss battles, are pretty bare and lack the normal fun guides and rails most pinball games necessitate.

Mario Pinball Land is not without fun , though. Despite all of the design flaws, it can prove fun in little bursts. It would take a gamer with an amazing amount of patience to play for hours straight, but it can be done. I think Nintendo should stick with the pinball idea; there is a lot of opportunity there in the handheld market. But next time, adapt the Mario world to pinball, not the other way around.