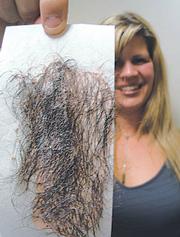 But somewhere along the line these objects of power and excitement became too dangerous for the coming generations of sexless half-men and adult film aspirants. The donut-capable Big Wheel gave way to (God help us) "Chicken Dance Elmo"; the Corvair went the way of the dinosaur while people encased themselves in flavorless tanks named for places they'd never go; and for every Tom Selleck, Frida Kahlo, or gym teacher nicknamed "Bear," there came a fey, smooth-chested fop like Eminem or Vin Diesel to perpetuate irrational fear.

Fear of the pelt.

And women were not immune. Eventually, the GAP model-adoring culture made the fairer sex ashamed to appear to be smuggling Phyllis Diller to the beach in their bikini bottoms. As swimsuits became more revealing, people, especially women, needed to compensate by hacking away at their natural covering, gradually going from the "Groucho" to the "Adolf," and finally to the "Yul." The trend's most notable and tragic victims were those who opted for the "Ben Franklin"; for them there was no safe return.

Witnessing the action from Park City, Utah, was massage therapist Elizabeth Krull. After six years in the massage game, the position started to rub her the wrong way.

So she packed her bags for smoother pastures in Esthetics (the umbrella study that includes massage, facials, waxing, body treatments, etc.). After attending school in Salt Lake City, she sought an apprenticeship with Analli Johnson, the "Guru of Esthetics." The results: Elizabeth is a Master Esthetician, a licensed massage therapist, and a certified Rolfer (Rolfing is an uncommon form of structural body alignment performed over several sessions), and she is now the "spa" part of Bello, a full service salon and spa at 1420 Kasold Dr., Ste. D.

Although the services she performs still include massage, she most enjoys the variety of waxing.

Currently popular is "The Brazilian," which only sounds like the name of a hitman and causes a great deal more pain. The Brazilian (a name obviously coined by someone who'd never met an actual Brazilian) involves the removal of all hair from the southern hemisphere of the human body, from Mt. Vesuvius to the back forty, a frightening proposition if performed on, well, pretty much anyone. But Liz remains pragmatic. And WAXTASTIC!

"It's not like I have pictures in my head of it. : I'm focused more on the hair than on 'the cornhole,'" she says, successfully baited by the author into saying "cornhole."

Training with people with whom she was comfortable helped her grow accustomed to pulling the rug out from under people. She had the procedure performed on herself, and then worked with an instructor and a trusted classmate so things wouldn't get too hairy.

"Okay, I'm going to be looking at people's crotches," she recalls "How am I going to desensitize myself to that? Like any athlete or professional, just going through the stages first. : It's not like I invited ten girlfriends over and said, 'Okay, get me desensitized.'"

The process is sim: Just a moment.

The process is simple. The client's hair should be right around a quarter inch (any shorter and the wax may not adhere; any longer and the hair may lay down in several different directions, causing matting and painful "lag time"). A thin layer of hot wax is applied to the skin in the direction of the hair growth. A semi-absorbent, nonwoven strip (Liz uses pellon) is then pressed onto the wax. The skin is then tightened and the strip is yanked off against the growth. Surprisingly, the final step is the part of the process that smarts.

And what kind of pain are people willing to go through to achieve the smoothness of a cave-dwelling crustacean? The Brazilian takes from 20 to 30 minutes, legs about an hour, and a back takes about 40 minutes unless you're Chuck Norris. For many, it's enough to make them flip their wig.

"I've only had one crier," Liz says cheekily. "There's a little bit of cussing that goes on sometimes. A lot of gripping. A lot of breathing - you know, the Lamaze type. People talk a lot about giving birth during this process."

(That being said, men who brave the pain of having their chests waxed still deserve nothing but your scorn and derision.)

But buck up, sons of Esau. There is hope. Stop braiding your ear hair! Make people stop saying they loved your work in "Patch Adams." Elizabeth Krull can make the pain go away. In a manner of speaking. And don't worry about the stigma of being a fancypants. Discretion may be Liz's middle name. (She didn't say.)

"I won't meet up with you in the grocery store and say, 'How's your wax doin'?,'" she promises.

But still, with all the pain and potential embarrassment, why would anyone go through the process?

"Well, we've all been to the pool," she states. "There are definitely people in town that could benefit from my services."

There could probably be a better title for this article. : D