By By Lauren Airey - Journal-World

Jay McShann didn't just play Kansas City jazz. He helped invent its foot-tapping rhythms and boogie-woogie beats. And tonight, he'll be on hand at FilmFest Kansas City to watch himself and other big names of the big band era in a 25th anniversary screening of "Last of the Blue Devils."

Bruce Ricker's 1979 documentary about a reunion of legendary jazz musicians in Kansas City is part of a miniseries of films about Kansas City jazz history within the 11th annual FilmFest Kansas City.

"We have such a great history of jazz in this city," says Bruce Rigby, President of FilmFest KC. "We always try to bring a very diverse selection of films to the festival. Typically we're going for international and foreign films, but we wanted to achieve some diversity within the American culture, as well."

Other entries in FilmFest Kansas City's Blues and Jazz series are "The Last of the First," a 1973 jazz documentary (hosted by Lawrence Journal-World entertainment editor Jon Niccum), and "Bird," Clint Eastwood's 1988 drama about Kansas City native and alto sax legend Charlie Parker. Eastwood loaned his own archival prints of his films for the festival at Ricker's request.

The festival, running through Thursday at the Cinemark Palace on the Plaza, will feature other themed miniseries and more than 50 foreign, independent and studio films. The festival's other sidebars include series devoted to French films and documentaries, as well as a symposium of film commissioners and a script reading of a film that will be shooting in Kansas City next spring. 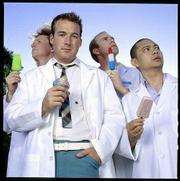 The comedy "Think Tank" is one of the movies that will have its world premiere at FilmFest Kansas City.

"We have some wonderful films that are going to appeal to people going to the university AND to people who are 75-years-old," says John Shipp, founder of FilmFest Kansas City and chairman of the board. "We have 23 different countries represented, from Mali to Burkina Faso. Those are two countries in African that a lot of people don't even know exist and we have films from there. We've also reached out into the community more than in the past."

One of the most highly anticipated events of the week, Shipp says, is the screening of the Oscar-nominated "Europa, Europa" with Agnieszka Holland, a Polish director who studied in Prague before making films in the United States. She'll also be screening her newest film, "Julie Walking Home," on Thursday evening.

"We have one of the world's leading European directors," Shipp says. "'Europa, Europa' is a masterpiece and we're just delighted to have a director of that caliber in Kansas City."

Because FilmFest is the oldest and largest film festival in the KC area, the organizers are annually challenged to come up with something fresh and new to attract viewers and participants.

"We've been able to bring a number of films that played in Toronto and other, larger film festivals," Rigby says. "We've gained some stature in the independent film world. It means something to win our Best Picture award."

For moviegoers with an interest in more mainstream films sans subtitles, some of the creative team behind indie hit "Napoleon Dynamite" is screening its latest movie about geeks who try to save their favorite pool hall by inventing the ultimate game: frictionless pool. Brian Peterson, who plays triple duty as writer, director and star of "Think Tank," will be at the festival with two of the movie's producers for tonight's world premiere and a Q&A session. Kansas City native Jeff Runyan has a small role in the film and worked his local connections to arrange the screening.

"It's not the same genre as 'Napoleon Dynamite,' but it's a very funny movie," Runyan says. "It's about these guys who should have grown up and gone to college, but they're still at home, hanging out at the local pool hall. It's very funny and very clean."

Tickets and full festival passes can be purchased in advance at www.filmkc.org. For more information and a full schedule of events, check out the Web site or call (816) 474-7100.

"We hope to achieve a film festival without any mayhem being committed, and maybe make a small profit," Shipp says. "There will be a lot of happy people who get to see a lot of great films."