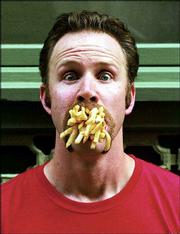 Morgan Spurlock, the director/star of "Super Size Me," will relate his experiences battling McDonald's while in Lawrence on Monday.

Filmmaker Morgan Spurlock really put his money where his mouth was on his fledgling documentary project, "Super Size Me."

He decided to subsist on nothing but McDonald's for one month, following three simple rules:

1) He could only eat what was available over the counter.

2) There was no supersizing unless offered.

3) He had to eat every item on the menu at least once.

The process, monitored by a team of doctors and nutritionists, turned the 33-year-old Spurlock into a physical and emotional wreck -- much to the chagrin of his girlfriend, a vegan chef.

The cinematic result of his sacrifice is a critically acclaimed box-office hit (it was shot for under $100,000 and has already grossed $11 million) that seems a shoo-in for an Oscar nomination.

Spurlock is set to discuss these experiences and his ongoing quest to help Americans come to grips with their fast-food dependence during a speech Monday night at Kansas University. He spoke with the Journal-World from Tokyo, where he is on tour to support the international release of "Super Size Me."

Q: When is the last time you ate at McDonald's?

A: It was day 30 of the movie. I haven't been to McDonald's since we finished the film.

Q: So you plan on never going back?

A: Never say never. But in the movie we surveyed 100 nutritionists and asked them how often you should eat this food. Most of them said you should never eat fast food, period. But of the ones that said you should, they said you should eat it about once a month. So based on that, I ate enough fast food over the course of making this film to last me eight years. So maybe around 2012 I might be ready for another Big Mac.

Q: What were the negative effects a month of McDonald's had on your body?

A: It sent my body into shock. I had my liver filled with fat to the point that doctors were comparing it to pate. My cholesterol went up 65 points. My blood pressure skyrocketed. I gained 24 and a half pounds. I was massively depressed -- more depressed than I've ever been in my life. The worst side effect was that my sex life just completely fell apart (due to impotence).

Q: Taking into account that you're currently in Japan, do other cultures respond differently to "Super Size Me?"

A: Outside of America where the health problems are so dramatic and it's such a serious issue, the health problems haven't taken root here. But what most foreigners really relate to is the Americanization -- the McDonald's-zation -- of their cultures. How this all-American way of eating has infiltrated and started to replace and diminish their indigenous forms of food, their heritage and their traditions.

Q: When you were doing research on McDonald's, what was the most startling fact you uncovered?

A: It was when I learned that they fed 46 million people per day, which is an insane amount of people. For this company to plead innocence with regards to the obesity epidemic in America, and to plead innocence in having influence on people's eating habits, it's preposterous. This is a company that has 30,000 restaurants all over the world. You in no way influence an industry or the way people make choices? It's crazy.

Q: McDonald's presumably pulled its supersize menu as the result of your film. Did they make any other policy changes?

A: They're continuing to roll out their healthy menu option. There's so many "coincidences" that they say have nothing to do with the film that I find to be just incredible -- from them partnering with the Curves Fitness chain to give out free memberships if you buy a salad at McDonald's, to them announcing that Ronald McDonald is coming out with an exercise video for kids. These are all just coincidences that have nothing to do with the movie.

Q: There is always going to be criticism that a stunt like this isn't completely fair to the company you're focusing on. In your case, is any of that criticism justified?

A: No, not at all. People look at these corporations like they should get a free ride, like we shouldn't question them. In this world of free speech that we live in, the greatest thing we can do is question these entities that have so much power and influence over the way we eat and live. I've been traveling all over the world now promoting the film, and it never fails that whatever country I go to there is a newspaper, magazine, TV station or radio station that won't do an interview with me, simply because McDonald's is one of their biggest sponsors. That's frightening to think about. Here's a company that sells burgers and fries that now has the ability to influence what you can see and hear and read.

Q: What McDonald's Land character are you most like?

A: I don't think I'm like any of them. Although when I was a kid I really liked Hamburglar. I thought he was probably the coolest.

Q: Do you appreciate the irony that your movie is shown in theaters where the only food choices are as unhealthy as McDonald's?

A: What I love about that is that if you watch a screening of "Super Size Me" and people come in with their giant popcorns and giant Junior Mints and huge Cokes, about 10 to 15 minutes into the film, everybody is setting those on the ground.

But there are people who eat fast food ALL THE TIME!!! I personally know folks who eat it everyday. That's messed up! I agree the film was not perfect but there is no denying McDonald's has swept and conquered the planet (moreso than any other chain). This is an obese society with a need for instant gratification and quick fixes. I think his film does a good job of showing that.

I enjoyed Super Size Me, but I hope it's not truly a "shoo-in for an Oscar nomination," when there are so many less-hyped but superior documentaries that an Oscar nod could expose to the public. What's amazing to me is, the director never fully answers the "criticism that a stunt like this isn't completely fair to the company you're focusing on." No rational person doubts that we should "question these entities," but the fact is that his line or inquiry was a STUNT, and not a fair look at the health effect of fast food. Vodka isn't particularly good for you, and if you drank it in lieu of all other liquids, your health would deteriorate fairly rapidly; Spurlock adopted a roughly analogous method to examine McDonald's. If it wasn't for the Jackass-style grandstanding, though, this film wouldn't have gotten its large audience -- maybe skewed attention to an important topic is better than none.